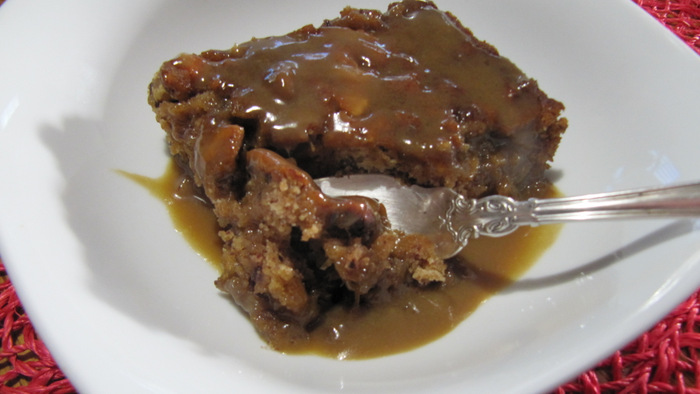 During my time in Devon, England, one of my goals was to try Sticky Toffee

Pudding. For those of you unaware of English vernacular, “pudding” is used interchangeably with “dessert” and includes cakes, and other baked goods. To add to the confusion, puddings can also be savory, such as Yorkshire Pudding, which is served with roast beef. So Sticky Toffee Pudding is actually a cake that can be baked or steamed and is smothered in a caramel-like sauce.

My opportunity to sample this iconic dessert was at Riverford Farm, a large farm in Devon that supplies organic produce and sustainably raised meats to restaurants and residents. It also operates a coveted weekend restaurant, where meals are served family style at big rustic tables, followed by an almost overwhelming selection of freshly made desserts. I would have loved to have been served a small portion of several of the desserts. As that wasn’t an option, my friends and I sampled each others’ desserts, but I admit, I was perfectly happy to lose myself in the over-the-top presentation of the date-rich cake smothered with its sticky sauce and sitting in a puddle of Creme Anglaise.

I returned home and tracked down the recipe online. The sticky toffee sauce turned out well but the cake, which I steamed as directed, was less of a success. I shelved the dessert for months as I wasn’t about to allow anything that rich and delicious in my home without at least a few hungry diners to share it with me. As autumn inched closer to winter, my opportunity finally came. Three of us went to a concert and returned home for dessert.

At this point I had done more research and read a variety of recipes. In the process I discovered that Sticky Toffee Pudding wasn’t a traditional English dessert at all. It was first served at a popular English roadhouse in the mid-1970s and became an instant favorite. A little more sleuthing and I found that it actually wasn’t English, but Canadian and sent to the owner of the aforementioned roadhouse. This was all good news as I now felt free to tweak the recipe however I chose as I wasn’t messing with history. I’ve added spices and walnuts to the cake, which I bake rather than steam, then drizzle a bit of Meyers’s rum over the cake when it comes out of the oven. I recommend using Medjool instead of the more readily available Deglet Noor dates if at all possible as they are a moister, more luscious date. After trying two different versions of the sticky toffee sauce, I created a hybrid of the two, using muscovado sugar and adding Meyers’s rum and vanilla to the sauce. The resulting pudding is wickedly delicious, enough so that you need to be careful not to have too much left over unless you wish to gain weight.

Look Delicious?  Pin it for the world to see!

For the Toffee Sauce