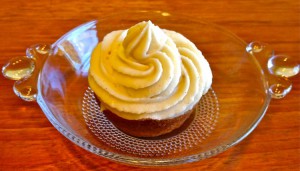 Have you noticed how many baked goods will lead with “Vanilla” but the cake, cookie, etc. tastes completely bland and doesn’t have the signature flavor of pure vanilla? If so, you will really enjoy this recipe. Not only does vanilla flavor come through loud and clear, the Mascarpone frosting is so good you’ll want to eat it by the spoonful right from the bowl! A perfect recipe to give as a thank you gift, but make sure you make extra for yourself!

In a medium sized mixing bowl, whisk together the flour, salt and baking powder.

In a large mixing bowl, cream the butter and sugar together.

Next stir the eggs and the vanilla into the sugar cream.

Using an electric mixer, mix the flour into the sugar cream.

Gradually fold the milk into the batter, 1/4 cup at a time until all of the milk has been incorporated.

Pour the batter into the cupcake tins and bake for 12-15 minutes until golden.

Remove cupcakes from the tins and cool on a cooling rack before frosting.

In a large mixing bowl cream together the mascarpone cheese, softened butter, vanilla paste and 1/2 cup powdered sugar until smooth.

With an electric mixer gradually mix in the rest of the powdered sugar, 1/2 cup at a time until the full 2 cups is blended in with the cheese and the frosting is fluffy.

Frost the cupcakes and serve.

Pin it for the world to see!