Too Many Egg Whites? Here’s a Thought 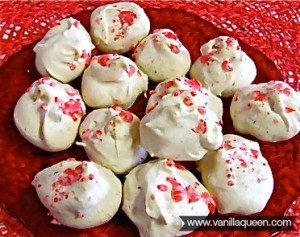 If there is a gene that predisposes us to love dessert, I have it. For the last several days I have been eating myself into heavenly oblivion. The Christmas pie I made that’s so good it makes you want to cry. Biscotti from Bob Benish’s Bakery. Divinely smooth fudge made by a friend. The leftover Italian cookies from a market demo. And, always chocolate.

I’m not sure which came first for me — discovering a love of dessert through baking or baking because I love dessert. While the answer might appear obvious,  we didn’t have daily dessert when I was a child nor did my brother or I have access to stores on our own as we lived several miles from town.

However, my first  forays into the kitchen included baking cookies.  My mother also made glorious pies and when she made them, we were right next to her as she would take the last bits of crust and make jam-filled turnovers. So, however it came about, I’m a fool for dessert as well as a fool for baking. And if there is ever a time for dessert, it’s during the holidays!

This year I was overtaken by retail.  I worked at New Leaf Market  six days straight before Thanksgiving. My business was  in high gear at the same time. There was no time to think of baking though I was surrounded by pies, cakes and cookies at the market. The Christmas push began the day after Thanksgiving and I worked seven of the last nine days before Christmas at New Leaf.  I got off work at 5:00 pm Christmas Eve, and I baked a Christmas pie within an hour of getting home, just before my daughter, son-in-law and grandsons burst onto the scene to celebrate.

This pie is why I’m writing tonight about egg whites.  It’s the most amazing pie I’ve ever developed.  I will give you the recipe, just not today.  In fact, I really don’t want to share the recipe at all except for the fact that I made limoncello as my holiday gift this year.  Not everyone is Italian and thinks that a hot day must be made better with a glass of icy, syrupy limoncello, so I felt obliged to share the recipe so that my friends know what to do with the contents in the beautiful bottle. And if I’m sharing it with them, I may as well share it with you.  To repeat myself, just not today.

Egg whites.  One of the ingredients in the incredible pie is lemon curd.  The recipe calls for 3 egg yolks and 3 whole eggs.  The question invariably then arises about how to use the egg whites. And while sensible people would use them in an omelet or fritatta, I’d rather use them in dessert. And the best desserts that come to mind that use only egg whites are meringues and marshmallows.

My first choice was meringue.  On the front of the December Sunset magazine was a picture of perfectly formed meringue cookies, some of the bases dipped in dark chocolate and the tops studded with pieces of crushed peppermint candy.  Yes, I thought, I’ll whip up some lovely meringue cookies, fill them with a blend of Guittard white and dark chocolate, and cover them with peppermint.

There was also an article in the San Francisco Chronicle’s baking page where several Bay Area chefs shared peppermint dessert recipes.  In said article was the suggestion that you use small peppermint candy canes as there is a larger surface area that’s pink and it will look better on the dessert.

By the time I had decided to make the cookies, it was less than two  weeks before Christmas and the miniature candy canes were on sale. I came home from work with boxes of candy canes and heated the oven first thing.  I whipped up the egg whites with cream of tartar and sugar.  Only problem was I forgot that I had three egg whites instead of two and that the three were from jumbo eggs.  Ooops.

The whites became quite thick but somehow bypassed the stiff peak stage and went on to an almost marshmallow cream texture.  By now it was 9:00 pm and I was in no mood to fight it.  I added the chocolate and plopped the gooey blobs onto parchment and sprinkled them with the peppermint candy I had smashed with a meat tenderizer.  They came out puffed but certainly nothing like the beauties on the cover of Sunset.

I didn’t care.  The staff at New Leaf eats anything that shows up in the break room, which is great as  experiments gone awry are never wasted.  What I hadn’t anticipated was the number of compliments I received.  “Those are amazing,” was the general consensus.  So I decided to make them again so that I could take a photo, only this time I’d make them right.

And I did.  However, the reality is the first batch was better.  The trick, it seems, is to underbake the cookies so they aren’t dry.  That way the peppermint doesn’t get hard and the chocolate stays soft.  Here’s the recipe.  Even though Christmas is over, no one will care that you have leftover candy canes in the cookies.  We’re all so addicted to sweets during cold weather that no one will think about it. Here you go.

The second option is homemade marshmallows.  Light, delicate pillows of sweetness that have hardly any calories.  You can eat them as a way to wean yourself from your holiday high without gaining more than another pound or two.  Hey, that’s a whole lot better than eating toast and gravy!

David Lebovitz gave me a wonderful recipe for marshmallows a long time ago and it’s a good one.  David’s Marshmallows

If you want to go over-the- top, make the marshmallows and then let them rest for a day or two so that they’re not super moist. Then take a 12-ounce bag of dark chocolate chips, add a tablespoon of butter, and melt in the microwave. Start with one minute, then stir. Add 30 seconds and stir again until melted.

One at a time, drop the marshmallows into the chocolate, coating all sides. Lift out with a fork. While the marshmallow is still on the fork, tap off the excess chocolate and place it on a sheet of parchment or foil. Sprinkle with jimmies, if you wish, and let them sit until dry.  Eat them as they are or drop them into cups of steaming hot chocolate.

Now aren’t these two desserts better than an egg-white omelet?

Happy New Year from the V.Q.!