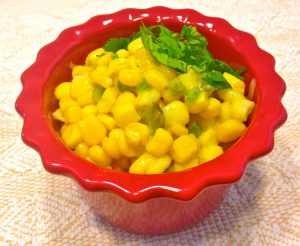 Adapted from a Recipe by Sara Moulton

Like other sweet veggies, corn and vanilla are a great match. You don’t need much, but the amount you add is the special ingredient that makes either fresh or frozen corn come alive. The pureed corn takes the place of cream and keeps the flavor bright and fresh.

1 serrano or jalapeno chili, seeds and ribs discarded if desired, minced about 1 tablespoon

1 to 2 tablespoons fresh lime juice or lemon juice, to taste

Carefully cut the kernels off the ears of corn. To do this, one at a time stand each ear on its wide end and use a serrated knife to saw down the length of the cob. You should have about 6 cups of kernels.

In a blender, combine 1 cup of the kernels and 1/2 cup of the broth. Puree until smooth. Set aside.

In a large skillet over medium, heat the oil. Add the onion and a pinch of salt, reduce the heat to moderately low and cook, stirring occasionally, until golden, about 8 minutes. Add the remaining corn kernels and another pinch of salt. Saute for 3 minutes. Add the chili and pureed corn, then bring the mixture to a simmer and cook for 2 minutes.

Stir in the remaining 1/4 cup of chicken broth, the vanilla, lime juice and basil. Season with salt and pepper, then simmer for another minute.