Roma in Late May 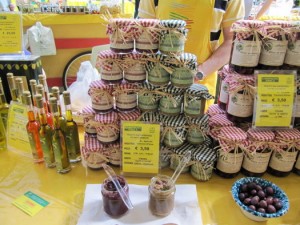 the list of movies filmed in this historic city goes on and on.  Close to three thousand years old, glamorous, filled with fashionable people,  glitterati and, the  origin of the paparazzi,

Roma enchants,  surprises and holds endless allure, drawing millions of tourists each year and more site-seers than any other spot in Italy.

Friends have told me over the years that although most people they know don’t find Rome nearly as charming as Paris or San Francisco, nor as exciting as New York, that they happen to love it.  Other friends were less impressed.   My curiosity was piqued.

We arrived mid-afternoon Saturday and checked into the Hotel Italia, close to the Massa Centro train station and located in the historic center of the city .  Rome was warm and humid, with a possibility of rain.  We had a less-than-stellar meal nearby, then settled into our rooms to rest before our evening adventure.

Our night walk of Rome, started about an hour before dark, strolling down Via Nazionale, the main street nearest our hotel. The clouds had blown over leaving us with a perfect evening for exploring old — and new — Rome.

Our first point of interest was the Piazza of the Monumento 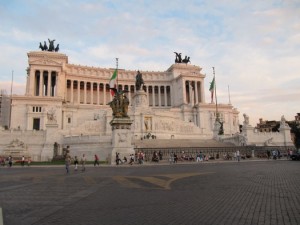 Nazionale di Vittorio Emanuele, also known as Altare della Patria (Altar of the Fatherland), built in honor of the first king of United Italy. A glorious piece of intricately carved marble, it stands 266 feet high and 433 feet wide and boasts Corinthian columns, fountains, an enormous statue of Victor Emanuele and two statues of the goddess Victoria riding quadrigas (chariots).   It also houses a museum and now, an elevator to the top of the monument, providing a panoramic view of Rome and the tomb of Unknown Soldier.

The monument also carries with it a lot of controversy — too white in contrast to the brown of the buildings around it, too large, too blocky, too pompous.  It is sometimes referred to as “the wedding cake” by foreigners and “the typewriter” by Romans.  Personally, I thought it was just fine as monuments go and I’m sorry I didn’t have the opportunity to ride the elevator.  Who wouldn’t want a panoramic view of a city?

Adjacent to the monument are numerous historic buildings and the Collosseum could be seen just beyond.   We observed a large community of  cats who live among one of the many archeological ruins found throughout Rome and who were emerging for an evening of socializing and caterwauling.  There were easily 100 cats, lounging, visiting and bathing in their historical digs a couple of stories below street level.  Like most of the sites, there were fences with signs posted with information about the ruins.  In this case there was also a sign that informed us that the cats were well fed and cared for and were being trapped one-by-one to be neutered or spayed, then released back to their community.  I’m sure that there wasn’t a mouse or rat to be found within a square mile of their home.

We walked for miles, visiting the outside of the Pantheon, the Trevi fountain, the Spanish Stairs and much more.  We were joined by thousands of locals and tourists alike, enjoying a warm evening of dining al fresco or strolling the streets. 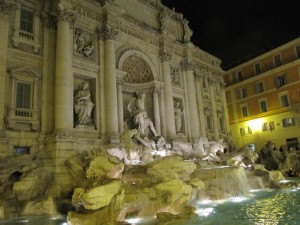 One of our destination points was Giolitti a famous gelatteria and sweet shop, housed in a liberty style building and dating from 1900. The sheer number of pastries, confections, gelatos, sorbetos and granitas offered would impress even the most jaded visitor.

A line extended through the ample building and out onto the sidewalk; employees directed the traffic.  We stood in line for 10 to 15 minutes for what we all agreed was overpriced, and not particularly inspired gelato.  Who cared?  It was Rome at night and all delightful fun. 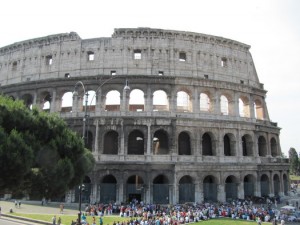 sites open.  We didn’t have reservations to tour the Collosseum and the lines were daunting, so we enjoyed it from the outside, along with the neighboring Arch of Constantine and the acres of ruins throughout the area.

Much to my delight, we stumbled upon an indoor Farmers Market, 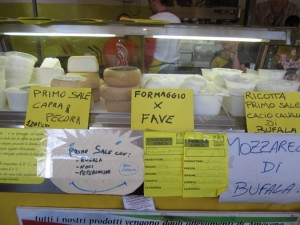 filled with spring produce, freshly made cheeses, salumi and other meats, honey, olive oils, truffles, an assortment of plants and some prepared foods.

I had fun talking with vendors in my own peculiar Spanish/Italian “dialect,” asking questions about their artisan cheeses, oils, etc.  and sharing stories of the foods and farmers of coastal Central California. I gazed longingly at the truffles, but didn’t purchase any as I don’t know the customs regulations on fungi and, given the price, I would have been reluctant to forfeit them at the airport.

We visited the Jewish museum and oldest synagogue in Rome then walked on to the Jewish quarter in search of carciofi alla giudia (Jewish style artichokes.)

In 1985 I wrote The Artichoke Cookbook.  It was my first cookbook as well as a fascinating lesson in Coastal California history as I was passed along from grower to grower.  I asked them about their stories, their families and their legacy.  Despite collecting many delicious recipes from the local Italian families, no one every once mentioned a recipe for Jewish style artichokes. 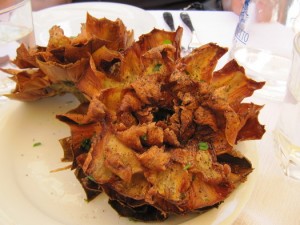 It was several years later that I learned about this amazing recipe that may be nearly as old as Imperial Rome as about 50,000 Jews lived there at that time.  At any rate, along with seeing the “old stuff” for which Rome is famous, having a carciofi alla giudia was on my culinary bucket list.

It was absolutely delicious and well worth seeking out!  The leaves were crisped and sprinkled with salt, pepper and parsley.  While not all the leaves were edible, they were far more so than traditionally prepared artichokes, and the heart was still green, warm and tender.   I also ordered saffron risotto with squash blossoms, exotic and interesting but not as tantalizing as the artichoke. 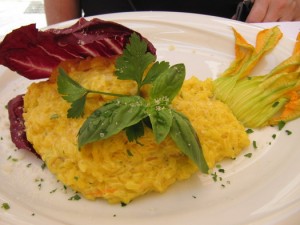 We continued our walk around the historical district, checked on the cats, who were wisely tucked into wedges of marble, away from the heat of the day, toured the Pantheon, sat on the Spanish Steps and eventually worked our way back to the hotel.  It was very hot and humid, time for a nap.

I wakened to the sound of water — it was pouring outside,  soon accompanied by lightning and thunder.   Dennis and Anthony had discovered a charming trattoria about a mile away, and the rain lifted by the time we were on our way for thin-crusted pizza and good Italian wine.  Okay, also an amazing chocolate cake!

We toured the Vatican the following morning, then back to the hotel for our luggage and a walk to the train station.  We discovered an amazing bakery across from the hotel, which was closed over the weekend.  Pizzas, sandwiches, delicate cookies, pastries, endless possibilities and all delicious.  We could have happily ordered one of everything.  Just as we were leaving I saw some brutti ma buoni and bought a half-dozen.  Not as good as in Cortona but almost.

What we purchased was perfect for dining on the train as we headed off for Sorrento and the Amalfi Coast.