Pork Tenderloin Is Perfect for a Fast Winter Dinner 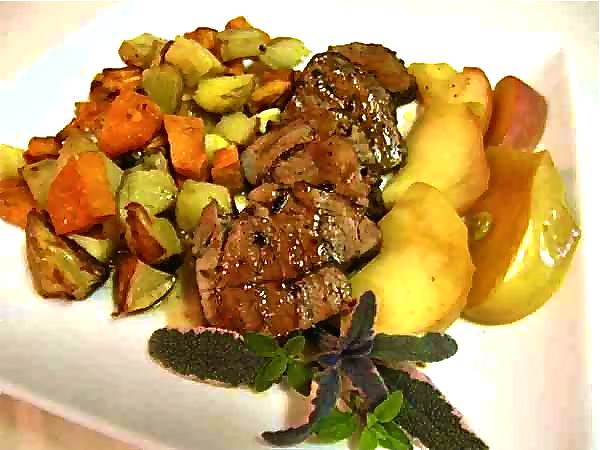 The warm, sunny Monterey Bay area got hit with a hefty freeze a week ago, early for the coastal area. My garden has “melted” and, although the weather has warmed up some, today has been cloudy with a damp chill that cuts to the bone. Even worse, the smoke from the December fire in Big Sur added a layer of gloom to the day.

My solution was to prepare pork tenderloin with an apple cider, maple vanilla  glaze that warmed Gina and me as we worked to get out the last of the holiday season’s packages.

Pork tenderloin is a lean cut of meat that works equally well in the oven or the grill. Despite having a minimal amount of fat, it is tender and moist. I recommend Niman Ranch pork if possible. The pigs are sustainably and humanely raised. I spent time with the producers of the Niman ranch animals a couple of years ago and was impressed by the care they provide the animals as well as the quality of the meat. It is worth paying a bit extra for our health as well as for the health of our planet and the well being of  the animals  that sustain us.

I would have liked to have provided more photos today, but we’re running a tight schedule with the holiday season and I’m also living and working between two places at the moment, so I’m depending on words.

The tenderloins are rubbed with a blend of salt, pepper, smoked paprika, ground vanilla bean powder and cinnamon. I allowed the meat to come to room temperature, rubbed them, then waited about 25 minutes before cooking. While the tenderloins rested, I cut up garnet yams, yellow potatoes and parsnips, sprinkled them with olive oil and sea salt, and put them in to roast. Brussels sprouts would have added color and nutrients but I didn’t have any and Gina said she was grateful I didn’t. While they aren’t my favorite vegetable, I have come to an accord with them, especially if they’re very fresh.

I also sliced the last of the Sierra Beauty apples from  my tree and poached them with some golden raisins  in fresh apple juice. And while my recipe says apple cider, I like to purchase fresh, local apple juice for the flavor. I added Ceylon cinnamon and Tahitian vanilla when the apples were tender.

The pork is seared quickly then roasted in the oven for 15 – 20 minutes, depending on your oven’s heat. That’s why it’s best to start the root vegetables while the meat comes to room temperature and absorbs some of the flavors of the rub. The apples can be made at the same time as the glaze. The entire meal comes together in less than an hour. If you prep the vegetables the night before, it will take even less time.

In plating this dish I hunted through my garden for a garnish. Fortunately, the variegated sage and the oregano survived the freeze. I realized that some fried sage leaves would have been a nice finish to add over the glaze. If you have sage in your garden, give it a try.

Even if you are only cooking for two, I suggest making the full two pounds of pork as you will have leftovers or some great sandwiches for the next day.

Note: As I’ve mentioned before, maple and vanilla work beautifully together. If you don’t have ground vanilla bean, add a teaspoon or two of extract to the cider glaze after it has reduced.