Not Your Grandmother’s Colcannon 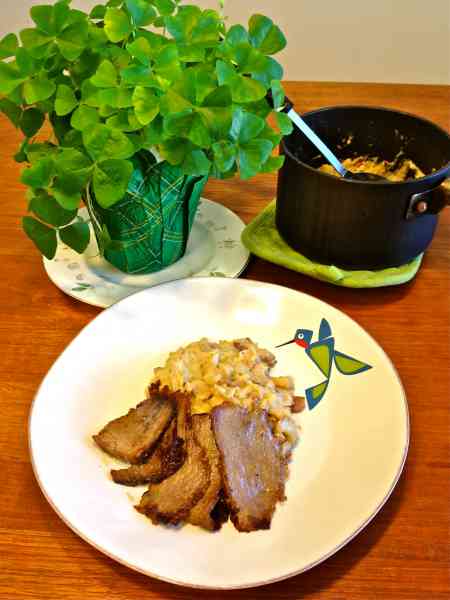 Most traditional comfort foods were born from necessity, are steeped in tradition and evoke such strong memories of childhood that no matter how simple, (and sometimes boring,) we tend not to stray far from the original recipe. Colcannon, the traditional Irish skillet dish of boiled cabbage and mashed potatoes, literally meaning white headed cabbage, is one of those dishes.

If you’re feeling adventurous, and perhaps introducing it to someone who doesn’t share the same cultural ties, you’re going to love this delicate and delicious new take on Irish Colcannon.

Not Your Grandmother’s Colcannon

salt and pepper to taste

Heat up a medium sized skillet pot, warming the oil, vinegar and vanilla paste. Toss the cabbage and bacon bits into the vinaigrette and saute on medium high heat until the cabbage becomes translucent and soft. About 5-10 minutes.

Add the cup of mashed potatoes, milk and creme fraiche, reduce the heat and simmer until the potatoes start to bubble.

Salt and pepper to taste, and serve with pan seared roast or corned beef.

“Did you ever eat Colcannon, made from lovely pickled cream?
With the greens and scallions mingled like a picture in a dream.
Did you ever make a hole on top to hold the melting flake
Of the creamy, flavoured butter that your mother used to make?”

“Yes you did, so you did, so did he and so did I.
And the more I think about it sure the nearer I’m to cry.
Oh, wasn’t it the happy days when troubles we had not,
And our mothers made Colcannon in the little skillet pot.”