Mercado Global: Helping Artisans One Piece of Jewelry at a Time

While attending Yale University in 2002, Ruth de Golia began working with women artisans in rural Guatemala on local development issues, including community health education and income generating projects.  She also did research for her thesis on the effects of globalization on local development while there.

Ruth’s experiences while doing research inspired her to create Mercado Global to provide tools, training and the logistical support needed to connect these rural women to mainstream US markets.  Using this model, she realized she could lift hundreds and eventually thousands of families out of poverty.

I met Ruth in 2006 when she attended the Women Leaders of the World program at Santa Clara University.  By then she and co-founder Benita Singh had launched Mercado Global and were building the infrastructure of what has become a brilliant model of effective social entrepreneurship.

I was especially interested in Mercado Global as I lived in Guatemala in the 1960s during Guatemala’s bloody civil war that was largely directed at the indigenous Mayas of the western highlands.  The crushing poverty, non-existent education and subsequent low literacy, and the high child mortality rates in the indigenous community, was appalling.  At that time, a large percentage of the indigenous Guatemalans did not speak Spanish, which further isolated them and made them extremely vulnerable.

As a result, I was excited to learn of Ruth and Benita’s program.  By educating women in a marketable trade, then finding a consumer market that would pay well for their work, there was great opportunity for measurable community change.

In fact, Mercado Global has been a stunning success!  Thirty-one indigenous women’s cooperatives are represented, with over 360 women from the western highlands working in jewelry and clothing projects.  Many of the women are widows or have returned to the region after being displaced by the war.  Approximately 72% of the women are illiterate.

Guatemala has a legacy of extraordinarily beautiful woven textiles and embroidery, and intricately made coin silver jewelry is a hallmark of Guatemalan artisans.  With this rich cultural foundation, Ruth and others working with Mercado Global provided the artisans with additional training and community skills so that the entire family would benefit from the women’s work.

Some of the many positive effects of Mercado Global’s programs include: 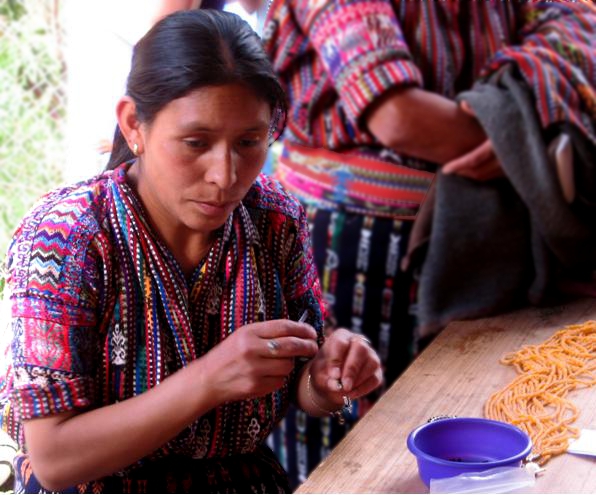 Increased School Enrollment.  All elementary school-aged children of Mercado Global’s original partner artisans are enrolled in school.  This is exceptional as most indigenous children in Guatemala have 1.3 years of education over their lifetimes.

Improved Health and Well-Being. Partner artisans and their children now have food security and far better nutrition.  They now also have a 25 percent increase in access to potable water and a 34 percent increase in electricity at home since partnering with Mercado Global.

Ruth and Benita have received awards and accolades usually bestowed on people with many more years of experience.  In 2004 Mercado Global was awarded the Yale Entrepreneurial Society’s Grand prize at the Annual Business Plan competition.  They were also part of the “World’s Best Emerging Social Entrepreneurs,” by the Echoing Green Foundation in 2004.

In 2006 Ruth and Benita were selected as two of “15 People Who Make America Great,” by Newsweek magazine. And, in 2007 Ruth was recognized as an “Architect for the Future” by Austria’s Waldzell Institute, for being an “exceptional emerging world leader and social entrepreneur.”

As the Executive Director of Mercado Global, Ruth has taken a business idea that originated in a dorm room and brought it to a successful business with offices in Connecticut and Guatemala, and with fair trade wages for hundreds of artisans and thousands of dependents.  There aren’t many people in the world who have accomplished this much in a lifetime, and most especially not at such a young age.

Please visit Mercado Global’s website at www.mercadoglobal.org to learn where the artisans’ wares are for sale, and sign up for their periodic newsletter.  Ruth’s work will keep you inspired.