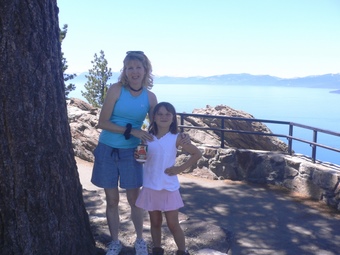 In 2004, Meg North Taylor’s three-year-old daughter, Victoria announced that when she grew up she wanted to be a ballet dancer, a doctor, and the queen of Asia. After considering her daughter’s very ambitious dream, Meg was struck by the difference between Victoria’s wishes and those of millions of impoverished children worldwide who simply wanted a full belly before going to bed at night.

Thinking about the incredible disparity between her daughter and children in much of the world sparked a dream of her own: Why not introduce life’s unlimited possibilities to disadvantaged children so they can dream as big as Victoria? “I wanted to find a way to introduce life’s unlimited possibilities to poor children,” Meg explains. “And I felt the way to accomplish that was by helping their mothers.” She was concerned that the demands of her busy job at the time as an analyst relations manager at Cisco as well as being a mother would not allow enough time to pursue that ambition. “But I felt a strong pull to do this work so I resolved to find a way.”

Meg asked friends and colleagues for help. Then, a few months later, a friend forwarded an email about the Women Leaders for the World (WLW) program, a remarkable colloquium designed for women leaders who aim to transform the future of their organizations, communities, and the world. She was accepted to the program, which took place in 2005 at the Leavey School of Business at Santa Clara University in Santa Clara, California. The program helped her to clarify and expand her vision for how. and where, she would improve the lives of families in poverty, leading her to decide to give microcredit, small business loans typically from $50 to $150.

Nepal immediately came to mind as Meg’s husband had lived in Nepal, and she knew
about the poverty and hardship there, brought, in part, by a 10 year civil war which  left
13,000 people dead and an estimated 100,000 to 150,000 people displaced. This conflict
greatly disrupted rural development activities and also sharply affected the country’s
greatest revenue source – tourism.

With an average household income of under one dollar per day, Nepal is the fifth poorest
country in the world, with more than 40 percent of its families living below the poverty
line. Nearly half of its 22 million people — a population that is expected to double by
2030 — are unemployed. Its food deficit is widening rapidly, as crops can’t keep pace
with demand.

Six out of 10 children are malnourished. With a 45 percent literacy rate — 28 percent for
women — there seems to be few options for a more productive life. Poor Nepalese people
live in homes with dirt floors and walls, and no electricity or running water. Their houses,
typically made of mud with straw roofs, are usually two rooms, one for the family to live
in, and if a family is fortunate, one for the animals. Cow dung is used for fuel.

Meg knew that helping children begins with helping their mothers. To that end, in 2006,
Meg formed Lending Promise to give small loans and related training and services to
mothers so they could form businesses to become financially independent. Meg, her
husband and daughter went to Nepal that summer and Lending Promise made its first
loans in the fall of 2006 to women in Nepal. In 2009 Lending Promise expanded to
include women in India as well.

Meg has become a pro at fundraising, including partnering with restaurants for dining out
nights where a percentage of the evening’s profit is applied to a specific program. But
there is always a need for additional funds to help more women support themselves and
their children.

Lending Promise has now given loans to hundreds of women in the two countries. In the
next few years, Lending Promise expects to give loans to over 2,500 women.  This will
help over 10,000 children grow dreams as large as those of Victoria.