For the Love of Chocolate Pie 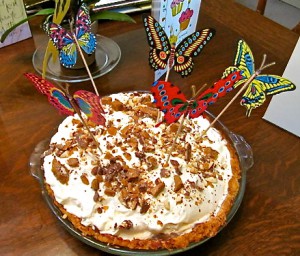 My dad was one of the original “Mad Men” who changed the world of advertising and marketing beginning in the late 1940s.  As a result, my parents  entertained in our home frequently, whether Sunday brunch for the neighbors or elaborate sit-down dinners for business clients.  I have lots of colorful stories from my childhood about the characters who dined at our home and the antics my father created to promote products.  However, today I’m sticking to chocolate pie.

My mother’s career was primarily to turn my brother and me into charming, clever and cultured young adults.  She was successful at this until the youth revolution of the mid-1960s, which came as a crushing blow for the parents of many in my generation.  But that also is another story. (We’re moving closer to the chocolate pie.)

Along with all the requisite work mothers did in the 1950s to create and maintain reasonably functional homes, the second part of her career was hostess to the luminaries my father entertained.    At this she excelled.

As dinners were often quite detailed, she stuck with a few tried-and-true desserts. We preferred pie over cake so her standard company dessert, except for birthdays and holidays was Marvel Chocolate Pie.

I still like this pie.  It’s easy and it’s delicious.  You can add more eggs and fold in some whipped cream to turn it into a chocolate mousse pie.  You can also upgrade the chocolate from chips to 65 percent single-origin chocolate.  But it has one flaw: the eggs aren’t cooked.

No one worried about eggs when I was growing up.  Enough small farms existed close-by and eggs were probably both fresh and local.  Now, with so many factory-farms, eggs are a much higher-risk food.  Frankly, I still make this chocolate pie, but I always use local organic eggs.

There are other options available, however, and it’s probably smarter to use cooked eggs, especially if the entire pie isn’t downed in one sitting.

My daughter made a killer chocolate pie for my birthday this year using Flo Braker’s Caramel Chocolate Cream Pie recipe from Baking for All Occasions.  Given that the topping has crunchy English toffee pieces on it, she decided that the caramel was unnecessary.  It was really good and has become one of our family favorites, especially with her boys.

Given that I’m an addict and refuse to seek treatment, I’ve been craving another chocolate pie ever since and scoured my cookbooks for recipes.  I’ve finally settled on Carolyn Weil’s recipe from The Baker’s Dozen Cookbook as it has a little more chocolate in it and I think a slightly larger filling.  Otherwise the two recipes are very similar.  And I’m adding the English toffee to the topping a la Flo as the crunch and sweetness are a great addition.  So, here is my adapted version of both recipes: Bittersweet Chocolate Pudding Pie

While the cold winter storms continue to travel down from Alaska, chocolate pie  will be high on my list of favorites to bake, but I did have some almost good strawberries recently, reminding me that it won’t be long before it’s once again time for fruit desserts.

What are your favorite late winter cozy desserts?