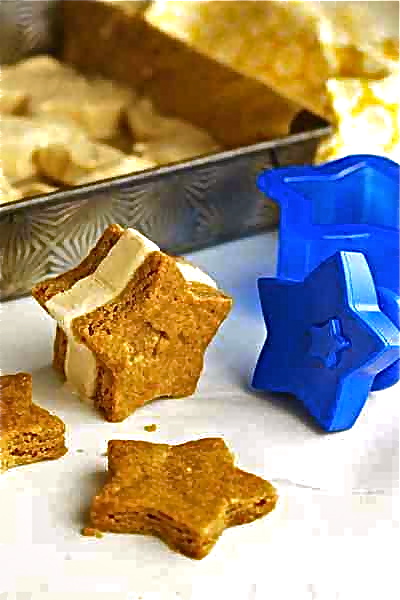 From I Scream Sandwiches by Jennie Schacht

Jennie says: With rich caramel echoed at every level, this one is all about extravagance. You could use store-bought dulce de leche to flavor the ice cream or make it using sweetened condensed milk, but making it yourself from fresh milk, while it takes a bit of patience, is easy and fun and immensely more complex and flavorful.

Flaunting nutty browned butter, the blondies are the perfect complement, and they could hardly be easier to make. Dark brown sugar contributes an extra layer of caramelized flavor, but light brown sugar will work too.

Nonstick spray or oil, for the pan

Whisk together the flour, baking powder, baking soda, and salt in a small bowl; set aside.

Melt the butter in a medium saucepan over medium heat, then cook several minutes longer, swirling occasionally, until it smells nutty and turns a deep golden brown, taking care not to let it burn. Immediately remove the butter from the heat and pour it into a heatproof bowl. Use a whisk to stir in the brown sugar, then let cool until no longer hot to the touch, about 5 minutes. Whisk in the eggs one at a

time, mixing well after each addition. Stir in the vanilla. Stir in the flour mixture just until no white streaks remain.

Spread the batter evenly into the prepared pan, leveling it with a moistened offset spatula. Bake until the edges just begin to color slightly and a toothpick inserted near the center finds some moist crumbs clinging to it, about 20 minutes, rotating the pan front to back halfway through baking.

Whisk 1/2 cup of the milk with the tapioca and salt in a in a medium saucepan until no lumps remain. Stir in the remaining 1⁄2 cup milk and the cream. Heat the mixture over medium-high heat, stirring with a heatproof spatula, until it begins to steam and slightly bubble at the edges. Adjust to a simmer and cook, stirring constantly, until the mixture thickens to the consistency of a cream sauce, about 2 minutes longer; do not fully boil. Set aside.

Whisk the dulce de leche, yogurt, and vanilla in a medium bowl until completely smooth. Whisk in the thickened milk just to combine.

Set the bowl with the ice cream mixture over a larger bowl of ice and water. Stir occasionally until the mixture is cool, taking care not to slosh water into the bowl. Cover and refrigerate until very cold, at least 2 hours. Transfer the bowl to the freezer for the last half hour before spinning it.

Freeze the mixture in an ice cream maker according to the manufacturer’s directions. Transfer the ice cream to a chilled container, cover, and freeze until firm but still spreadable, about 4 hours.

Dissolve the baking soda in 2 teaspoons of water; set aside by the stove.

Whisk the milk, granulated and brown sugars, and golden syrup in a large, deep, heavy nonreactive soup pot over medium heat to dissolve the sugar. Use the tip of a paring knife to scrape the seeds from the vanilla bean into the milk; drop in the pod too. Bring to a simmer, reduce the heat to low, and cover the pot for 5 minutes to help dissolve any sugar clinging to the sides. Remove the cover.

Add the baking soda mixture, taking care to avoid boil-overs and steam burns, as the mixture will bubble up fiercely. The mixture will continue to foam as you cook it. (If the foam climbs too close to the top at any point, take the pot off the heat briefly, stir, and return to the heat.)

Simmer the mixture slowly, stirring frequently with a wooden spoon or heatproof spatula, as the milk goes from white, to light tan, to a medium and then a deep caramel color. It’s ready when it thickens to the texture of a caramel sauce and measures about 11/4 cups, about 1 hour. (It will thicken further as it cools.)

Stir in the salt and let cool to room temperature. Remove the vanilla pod; rinse and save for another use, or discard. If not using immediately, refrigerate the dulce de leche in a clean glass jar, covered, for up to 1 month.

Cut out shapes while the blondies are still warm using ice cream sandwich molds or a 2 1/2-inch round cookie cutter, cutting them close together to form 24 cut-outs. Let cool completely.

If you cut the blondies with a cookie cutter, pair the cookies and sandwich a scoop of ice cream between each set of cookie bottoms. Press gently to squeeze the ice cream slightly beyond the edges. If you wish, smooth the ice cream flush with the cookie edges.

The sandwiches can also be formed as a slab by cutting the large blondie in half cross-wise to form two 9-by-6 1/2-inch blocks and filling with the ice cream. Wrap tightly and freeze until very firm before cutting into 4 strips in one direction and 3 in the other to make 12 sandwiches.