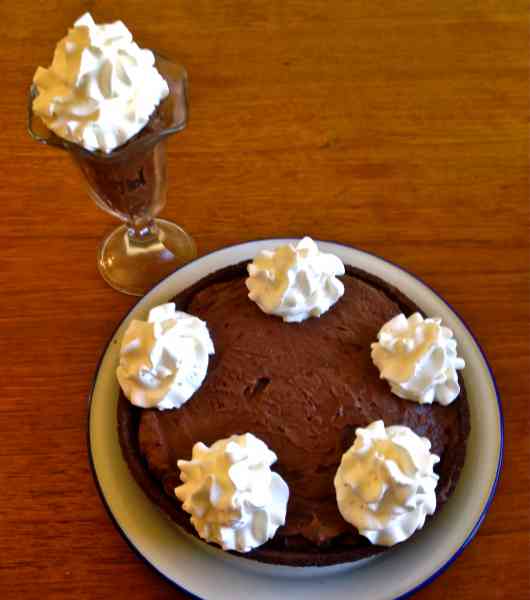 Chocolate that is smooth and rich in flavor is ideal for using in mousse.

You can use either milk or dark chocolate, but if you use milk, make certain that it is at least 35% cacao.

What’s special about this recipe is that it’s cooked.  Most mousses are not cooked, which can be a problem for anyone with a compromised immune system.  While cooking adds an extra step, you don’t need to be concerned about using eggs.

Look Delicious?
Pin it for the world to see!
Print

Put the chocolate and 1/4 cup milk in a large heavy saucepan over low heat until the chocolate starts to melt. Set aside. In a medium saucepan, heat the milk until bubbles begin to form around the edge; don’t allow it to boil.

In a small mixing bowl, whisk the egg yolks with the sugar and salt just until well blended.

Whisk half of the hot milk into the egg yolks. Return the yolk mixture to the milk in the saucepan. Cook slowly over low heat, stirring continuously with a wooden spoon, until the custard thickens slightly and coats the back of the spoon (enough so that a finger run through the sauce would leave a clean trail). This may take as little as a few minutes or as many as 20, but once it happens it will thicken quickly so watch the mixture carefully as the eggs will coagulate. If using a thermometer, make sure temperature does not exceed 160 degrees F.

Immediately pour the custard through a strainer over the partially melted chocolate. Whisk until smooth. Add vanilla extract and blend in. Transfer to a large mixing bowl and let cool, stirring occasionally until the mixture is about 95 degrees F. Dab a little on your lip; it should feel just slightly cooler than your lip. Don’t let the mixture set or the mousse won’t be smooth.

Beat two cups of the heavy cream until it holds soft peaks. Remove one cup of the whipped cream for topping the mousse when serving and refrigerate. With a rubber spatula, gently fold half of the remaining whipped cream into the chocolate mixture until no white streaks remain. Gently fold in the rest.

Spoon the mixture into 6 – 8 goblets or a large bowl. Chill for at least 3 hours or for up to two days.

To serve, dollop a little cream on each serving and scatter with chocolate shavings.