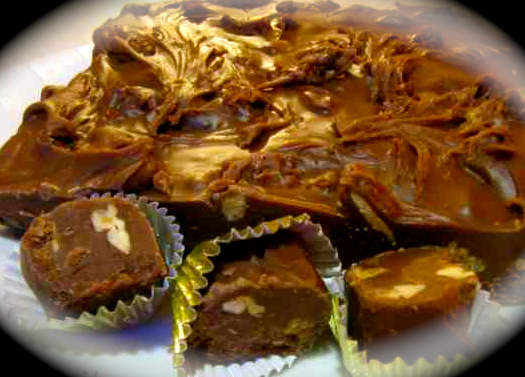 True old fashioned fudge (not the kind with marshmallow crème) deserves to be elevated to the same lofty status as really good truffles and other high-quality, handmade, small-batch candies. You need the best possible ingredients and, as my grandfather often said, “elbow grease.” Your reward will be a prize-winning, melt-in-your-mouth confection that family and friends will beg you to make again and again.

Old Wives Tale Alert: You can make fudge when it’s raining. If you do it right, it will set up. However, make certain there isn’t a draft where you’re preparing the fudge.

It is important not to get too creative, at least not at first. I’ve noticed that Andrew doesn’t follow the recipes precisely, but that’s because he’s been doing this for quite a while and has learned from his successes and failures. Sometimes the recipe isn’t quite accurate. I’ve done my best here to give you tips to make the fudge turn out perfectly.  No cutting corners if you want success.

The first thing you need is a really good candy thermometer. The ones we use have a base that rests on the floor of the pan so that the thermometer itself is elevated slightly. I found mine at Bed, Bath and Beyond. We would like to 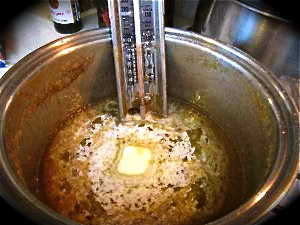 find a really good digital candy thermometer as it isn’t easy to see the tiny lines through the steam while the candy cooks.

Note: I thought that the thermometer read 230 degrees F. Andrew said it was 232. Why? I was looking down on the thermometer; Andrew was partially squatting so that he was eye-to-eye with the thermometer. It’s not easy to see the small lines so figure out the best way for you to read the precise temperature.

You need a wooden spoon with a very sturdy handle for beating the fudge, a good rubber scraper, a balloon whisk and a heavy, straight-sided  3-quart saucepan with a lid. If the base of the pan isn’t heavy, purchase an inexpensive heat diffuser, which acts as an extra layer of protection to  keep the mixture from scorching. 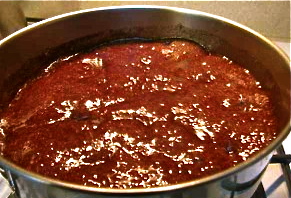 We also used a small bowl of water to do the “sof t ball” test, the temperature most mixtures must be  before removing from the heat. When the thermometer reads 238 degrees F, drop a small bit of the mixture into the water. See if it forms a ball. Take your fingers and see if it easily takes form. If it doesn’t, cook it to 240 degrees; if it does, remove the pan from the heat.

A word about your stove burners: If the burners on your stove are unusually small, you will want to turn the heat up a little higher than if they are big. The mixture must boil evenly throughout the entire pot in order to lose enough moisture to set up properly. Burners that are too small will cause only the center of the mixture to boil unless you have the heat set higher. If you don’t know if your stove burners are small, watch how the bubbles form in the pot. If they are only in the middle,  turn the heat up a little.

Note: This is an important issue. No two stoves are alike so it’s difficult to give precise directions on heat. You may need to experiment with this. And remember, except for the cost of ingredients, any failures are simply learning experiences.

Another detail that’s important – one that I personally am guilty of – don’t multi-task when you’re making fudge. There is usually some down-time while the fudge rests and cools down. You can do something else during that narrow window, but make certain that you set your timer so you don’t get involved in something else and forget about the fudge. I ruined a pint of pomegranate juice I was reducing to make pomegranate molasses today because I was multi-tasking, which is why I mention how important it is to stay on-task.

I’ve given you the basics here and I am including some comments in the recipe itself and afterwards. Oh, and we changed the name of this fudge from “Granny’s Best Chocolate Fudge” because it sounded a little too “ole-timey” (read: kitsch) for our tastes.

In a 3 quart saucepan over medium-low heat, bring the sugar, milk, chocolate and corn syrup just to a boil, gently stirring with a whisk until the sugar dissolves and the mixture almost comes to come to a boil. This means little bubbles around the side of the pan, not bubbles all through the mixture.

Cover and cook 3 to5 minutes to dissolve the sugar crystals on the sides of the pan. (At 3 minutes remove the lid to see if the mixture has bubbled up and the sugar crystals have all dissolved. If not, cook an additional minute or 2. Remove the lid and cook without stirring, to the soft ball stage (240 F for firmer fudge; 238 F for softer). The mixture will rise up in the pan but it won’t boil over.

Remove from the heat, either placing the pan on a cool burner or on a cooling rack. Add the butter to the fudge without stirring. Cool 20 minutes then add the vanilla.

Move the pan to a table or counter where you can easily beat (or stir briskly) the fudge with a heavy wooden spoon until the candy thickens and holds its shape. Don’t take breaks even if your arm starts to hurt; just change hands quickly. Little details like this can cause big problems in the finished product. You will know it’s time to stir in the nuts when you see the fudge become slightly opaque. That’s when you stir in the nuts just until well coated.

Pour the fudge into the pan. If the fudge is too thick to pour easily, scrape it out with a rubber scraper. Gently press the candy into the pan. Andrew uses the wooden spoon to “dab” it into place. Don’t try to spread it evenly or it will make a mess.

Cool the fudge at room temperature for 2 to 3 hours. The fudge needs to relax for best results. You can then refrigerate the fudge before cutting or proceed with cutting it into squares. Wrap tightly in foil or plastic wrap to refrigerate or store fudge in an air-tight container.

* I like Guittard, Valhrona, El Rey or Callebaut. The important thing is to use the best quality you can afford and don’t use chocolate chips.

** This is my personal bias but I feel it’s important. Unless corn syrup is labeled “organic” it is made with genetically modified corn. As there are no tests showing that gmo’s are safe, and because there are studies that indicate that they may be harmful to our health, I strongly suggest taking the time to find organic corn syrup. I suspect that you can substitute agave syrup but I don’t know how it may alter the finished fudge as I haven’t yet tried making the fudge with agave syrup.