Yucatan — Recipes From A Culinary Expedition 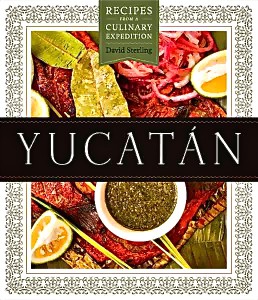 When David Sterling’s book, Yucatan: Recipes from a Culinary Expedition, arrived at my door, my jaw literally dropped. As I removed the packaging to reveal this 564 page (6-1/2 pound) gem, I could barely believe my eyes. It is absolutely stunningly beautiful!

Whether you have already visited the Yucatan, dream about visiting the Yucatan, have any interest in Mexican culture, geography or cuisine, or just enjoy armchair travel and food, this book more than delivers. It is  a magnificent tribute to one of the most unique states in Mexico.

David, owner of Los Dos culinary school in Merida, takes us through the Yucatan on a culinary culinary and cultural exploration that, in some respects, spans from Mesoamerica to the moment. The book has been divided into six sections: The Yucatecan Market, The Maya Heartland, Fertile Shores (coastal Yucatan), The People’s Food, The Urban Matrix and The Pueblos.

Each section is filled with full-color photos, a discussion about the history, culture, people, ingredients and how the ingredients make the foods that define the culture and people. Recipes are listed in Mayan, Spanish and English. He even breaks down the meanings of  Mayan words so that everything fits into the matrix he has assembled.

My eyes filled with tears of memory of living in Guatemala in 1963 and 64 when I first tasted tropical fruits I never knew existed such as mamey, chico sapote, achiote and guanabana, and I marveled that there are even some fruits and greens indigenous to the Yucatan that I don’t recognize.

We visit the monte, the milpa and the solar, the three places of importance in the daily life of rural indigenous Mexicans. This section transported me to the region of Veracruz state where I did my research on vanilla and the indigenous people whose ancestors first domesticated vanilla.

David escorts us along coastal Yucatan and weaves stories of the peoples and cultures whose foods or ingredients have influenced Yucatecan cuisine. Cuba is in close proximity with the Peninsula, and even before the Cortes arrived, Spanish soldiers visited the Yucatan. As a result, olives, olive oil, capers and other Spanish ingredients were incorporated early into the menu. The Lebanese came to the Yucatan in the late 19th/early 20th centuries, bringing their Mediterranean culture and foods. And, of course, the Mayas were here early in Mesoamerica and some of the foods prepared daily date back many hundreds of  years.

We step into bakeries, meat shops, cantinas and family restaurants. We go to cities like Valladolid and Merida, and we visit the small towns famous for their specialties. And, as we travel to each of these places both through words and photos, there are stories, recipes, descriptions and explanations that make you feel as if you are there. For me, it was like being transported back to when I took a bus across the Yucatan Peninsula in 1992. My olfactory system was ignited and I could once again smell the markets, the little restaurants, the tamales baked in banana and chaya leaves, the sharp salty smell of the coast, the heat of the July sun at Chichen Itza. Thank you David!!

So, what’s on the menu? A lot! The more exotic recipes include Venison in Pipian Rojo, Roasted Quail with a Puree of Squash Seeds, Chaya and Habanero, Duck Magrets in Honey-Anise Liqueur Glaze, Lobster Tail in Charred Chile Sauce and Pork Belly Confit.

Although some of the recipes are complex and many require ingredients that have no easy substitutes, David’s instructions are extensive and supportive, no surprise given his many years as an instructor, and he offers suggestions for how to make these recipes with the ingredients we are likely to have on hand.

I have already invited a friend from the Yucatan, a friend from Guanajuato and an Ecuadorian friend to join me in choosing, then preparing, some of these very special recipes. We haven’t yet worked out a date that suits us all, but we’re all excited by  the many options to choose from and new flavors to explore. In the meantime, I have been given two recipes to share with you that make good use of vanilla as well as other tropical flavors.

The first is Conchas, a sweet breakfast bread with flavored shell-shaped toppings. You may have had something like this from Mexican bakeries, but there is nothing quite like homemade conchas. 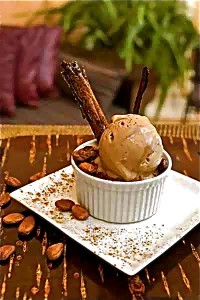 As we  say at the dining table, “Provecho!”

I can’t recommend this book more highly. It is truly a visual feast, a culinary and cultural voyage, a tribute to the unique regional dishes and, to the Mayas of the Yucatan, to whom this book is dedicated. I have been inspired to return to the Yucatan, to beautiful Merida, a city I fell in love with under the full moon in July of 1992, nearly five hundred years after the two worlds collided and a new cuisine came into being.