A Tribute to Diana Kennedy 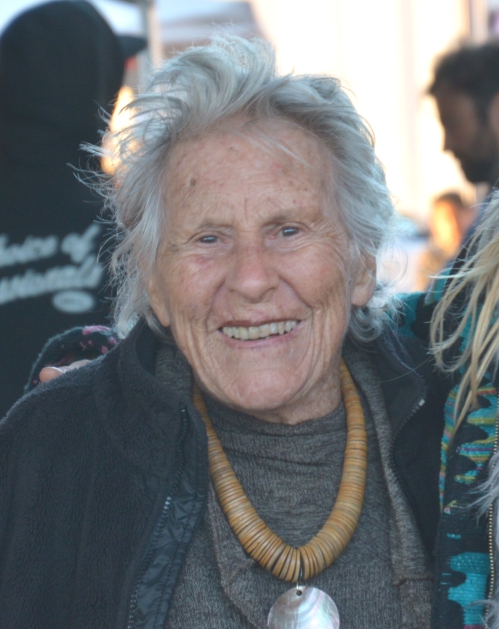 If you’re interested in and enjoy Mexican cuisine, you’ll want to remember this name – Diana Kennedy, is arguably the world’s authority on Mexico’s incredibly diverse and unique foods, flavors, dishes and their preparation. She has written nine books on the subject. Her first book, The Cuisines of Mexico, came out in 1972, and is credited with opening American eyes to the extraordinary regional flavors of Mexico.

So how did Diana, who was born in 1923 in Loughton, England, end up writing Mexican cookbooks? She had (and, at nearly 94, still has) an adventurous spirit and the willingness to step outside the parameters of her era and live her life fully! She was in Haiti on holiday in the mid 1950s when she met her husband, Paul Kennedy, a correspondent for the New York Times. He invited her to visit Mexico, which she did. Two years later they married and divided their time between Mexico and the United States. It was in Mexico that she began her life’s work, documenting the foods and culinary techniques of both the indigenous and the mestizo communities. So while we may think of Mexican food in broad terms of tacos, enchiladas and tamales, Diana assumed the role of culinary anthropologist and explored the many variations of these and many other traditional dishes of Mexico. She also brought to the forefront the unique regional recipes of people living far off the grid. In fact, while many of us don’t think of Mexican cuisine as being hugely diverse, in reality it is far more diverse than French cuisine.

In late 1965 Diana and Paul moved back to New York City. Paul passed away in 1967 but Diana remained in the United States and opened a cooking school in her apartment with the encouragement of Craig Claiborne. The classes ultimately led to the writing of her first cookbook. In 1976 she returned to live in Mexico permanently and in 1980 she learned about a region of the altiplano of Eastern Michoacan where there are many orchards. She built an ecologically-based adobe home, only accessible by four-wheel drive. From this base she continued to finance, research and document Mexico’s cuisine, driving herself into the mountains in an old Nissan truck and sitting with women in local farmers markets, kitchens and outside by ovens, observing, asking questions and preserving their food traditions. Diana commented that the Mexican government was kind enough to give her a driver’s license that is good until she turns 100. However, it is now too dangerous in many regions to drive alone in rural areas. 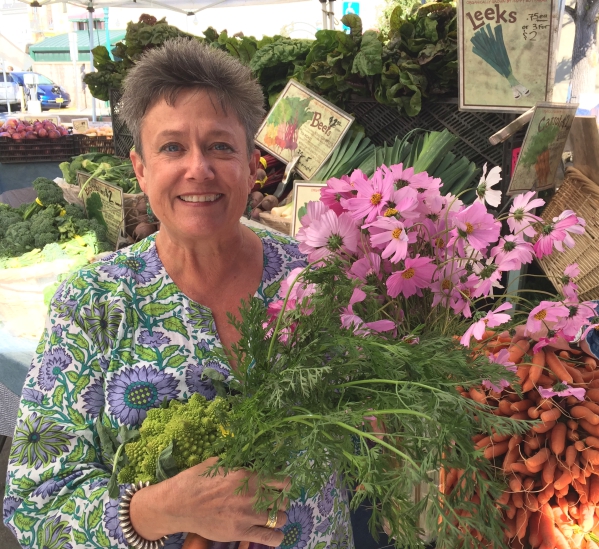 I first met Diana in San Antonio, Texas, in 1995, where my friend and colleague Elaine Gonzalez and I spoke at the International Associations of Culinary Professionals on the Early History of Chocolate and Vanilla. At that time I gave Diana a flower ornament made of vanilla beans. When I saw Diana in Montreal in 2003 she told me she still had the ornament.  However, it wasn’t until this last November that I again saw Diana at a special event organized by Betsy McNair, a culinary professional and tour guide who leads unique and very popular trips to Mexico. The event, hosted at Soif Restaurant (an excellent restaurant and wine bar, in Santa Cruz), was a fund raiser for the Diana Kennedy Foundation, a program designed to fund her environmental projects with the goal of protecting food supplies. Her years in England during World War II where all of Europe faced food scarcity made a deep and lasting impression upon her. 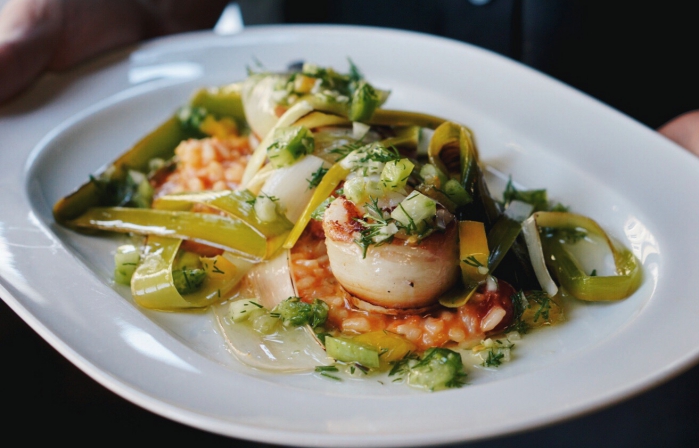 Betsy seated me next to Diana at dinner. While it was tempting to “keep her all to myself,” I was well aware of how most of the attendees felt the same way. She had misplaced her glasses earlier that day and someone lent her some “readers.” As I can certainly attest, it’s frustrating and very difficult to function comfortably without glasses, so I was her menu reader and assistant in navigating her meal. Diana later gave a gracious 20 minute talk about her work, and her month long US tour promoting her latest book, Nothing Fancy, a revision and expansion of a book published in 1984 and most recently published by The University of Texas Press, Austin, 2016. It is as close to a memoir as she will likely write, and offers a delightful array of the recipes most dear to her heart; only some are Mexican. 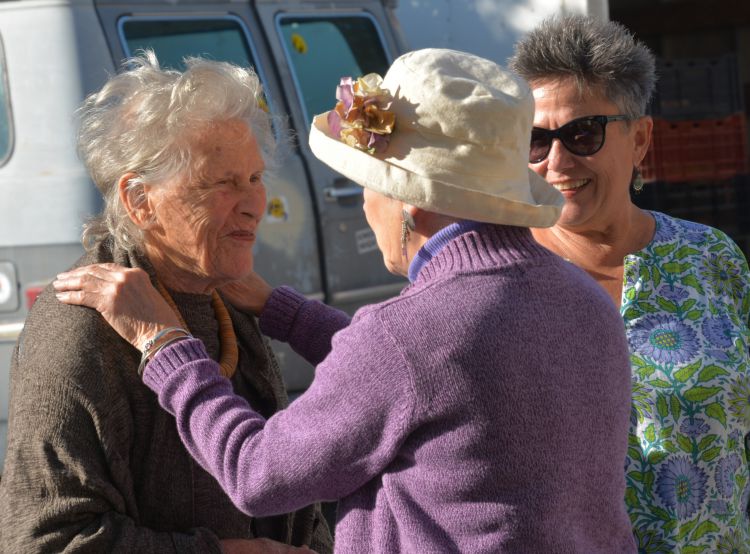 The following day we again connected at the Santa Cruz Farmers Market where Diana both spoke and signed books, which she repeated at the Cabrillo Farmers Market on a cold, drizzly morning three days later. Having done book tours I know just how demanding they can be; at 93 I am in awe of her continued dedication to the legacy she has given the world. It was a special honor to spend time again with Diana on what will most likely be her last national book tour. That said, knowing Diana’s stamina and tenacity, I may be completely wrong! 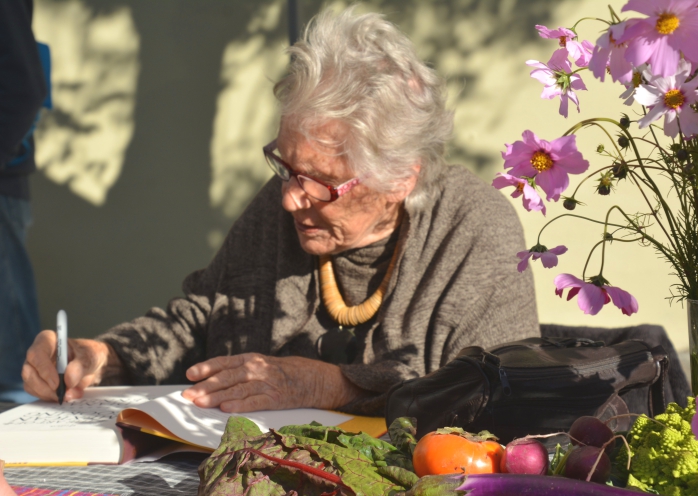 Diana is the recipient of the Order of the Aztec Eagle, the highest award given by Mexico to a non-Mexican, as well as the Member of the Order of the British Empire for furthering cultural relations between the UK and Mexico. She also received a Lifetime Achievement Award from the International Association of Culinary Professionals, both a nomination and an award for the Best Cookbook of the Year from the James Beard Foundation, and numerous additional international awards too long to list here. 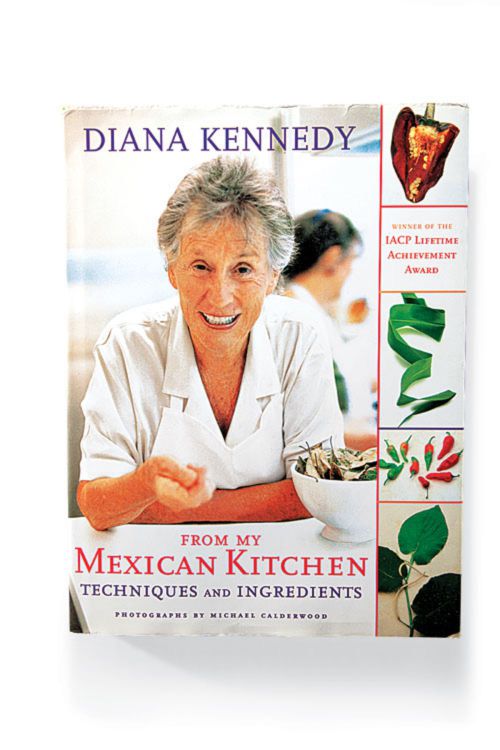 If you are choosing just one of Diana’s nine books, she recommends From My Mexican Kitchen—Techniques and Ingredients: (Clarkson Potter, New York 2003). I gave this book to my daughter and son-in-law with hopes that next holiday season (or sooner), we will make tamales as a family. As we say in Mexico to all who are dining, Provecho!