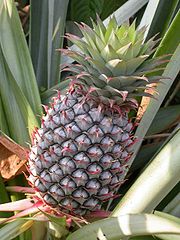 Pineapple, Ananas comosus, is native to Southern Brazil and Paraguay, and was passed along through indigenous tribes up to the Caribbean, where Columbus first encountered this glorious fruit.  Its English name originally came from an earlier name used to describe what we now call pine cones.  In its native habitat it was called nanas, by the Tupi people, and is called pina (with a tilda over the n) in Spanish.

The Spanish brought pineapples first to the Philippines.  They were introduced to Hawaii in the early 19th century and the first pineapple plantations began in 1886. Dole began growing pineapples on Oahu in 1901; Del Monte in 1917.  Only Dole and Maui Pineapple Company have remained major growers in the Islands; Hawaii is the biggest producer of pineapples for the U.S.  Southeast Asia dominates the world production of pineapples, but Costa Rica exports the most fresh pineapples of any single country, shipping 322,000 tons annually.  A lotta pineapples!

The pineapple is the fruit of a bromeliad and produces once a year.  The flowers open at night, rather than during the day, and there are certain bats that pollinate the fruits.  They are also pollinated by hummingbirds, but this encourages seed formation, which negatively affects the flavor of the fruit.  As a result, hummingbirds were banned from being brought to the Hawaiian Islands, where pineapples are grown commercially,.

Pineapples were exalted in Europe in the 1500s – 1700s.  Due to the relative fragility of  fresh pineapples, those that made it to Europe were available only for royalty and the titled.  The pineapple motif was popular in furniture, paintings and even designed on serving ware.

Pineapple contains bromelain, an enzyme which breaks down protein.  Pineapple juice is, therefore, good as a marinade and meat tenderizer.  The bromelain in fresh pineapple interferes with jellies and gelatin desserts, preventing them from setting.  However, bromelain breaks down in the canning process; so, canned pineapple can be used with gelatins.  Pineapple should not be eaten by Hemophiliacs or anyone with kidney or liver disease, as it may reduce the time it takes for one’s blood to coagulate.  Pineapple is, however, helpful in easing joint pain caused by arthritis.

Pineapple is a good source of manganese and vitamins C and B1.  It is delicious eaten raw, in fruit salads, in baked goods and desserts, as well as in savory dishes.