l’appart: The Delights & Disasters of Making My Paris Home

David Lebovitz’ latest book, l’appart: the Delights and Disasters of Making My Paris Home, is a cringe-worthy tale of 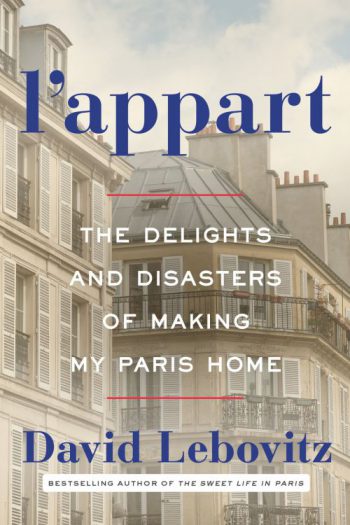 a multi-year ordeal that he might never have undertaken had he even an inkling of difficulties he would endure.

When he describes his old apartment and why it was so difficult to give it up to purchase a Parisian apartment, you can clearly imagine the spectacular view of the Eiffel Tower with its effervescent, bubbling lights and appreciate his ideal location on the edge of the Marais, the extraordinary neighborhood farmers’ markets and especially the rare elevator to the top floor of the building where he lived. He also shares the quirky downside of older apartments in the City of Light, issues which might be deal breakers for a lot of Americans, though it’s amazing what we can adjust to if the percs outweigh the pain. But the desire for a big kitchen with a full-sized oven, a big “American” refrigerator, the physical space to properly prepare and refine his recipes and write his books, would seal his commitment to the city he now considered his home.

In David’s inimitable voice, l’appart is his tale of the incredible challenges locating, purchasing and then renovating a Parisian apartment. As I read the nearly unbelievable complications of even finding a listing of apartments for sale, it struck me as so foreign and complicated, something that never occurred to me was possible in a country — and city — famed for their food, their wine, their chocolate, and what I presumed would be hundreds of years to refine a civilized life. In other words, until reading l‘appart, I was just as naive as most Americans in assuming we must have learned from the Europeans on how to set up and manage everything from banking to real estate to home maintenance and beyond. Nope. It’s a nearly incomprehensible, convoluted experience as the following passage indicates.

“Life abroad isn’t for everybody. Americans invariably miss customer service the most; not being questioned under a bright lamp in the back room if you want to exchange a shirt for a different size, for example. Or not having to make an appointment in advance to withdraw money from your bank, as I learned when I needed to make a larger-than-normal withdrawal to pay a contractor who wouldn’t take a check. I had to go to the bank twice to meet with bank officers so they could get to the bottom of why I wanted to take money out of my own account. (Which tells you why there are so many stores selling home safes in Paris.) They weren’t buying my story. After a few rounds of tough questions in a glassed-in-cubicle, I finally said I needed the money for a sex change in Thailand, thinking they’d realize their inquiries were a little overly probing. There was silence for a moment as they considered what I’d told them, then they agreed to let me withdraw the money. I was just hoping they weren’t going to require post-op proof to verify that I had gone ahead with the procedure.”

Or, “In America, your driver’s license or passport is the most important document in your life. In France, it’s the electric bill. Your facture d’electricite is the document that proves that you live in France. You will need to produce a copy of your electrical bill to do anything from getting a visa to opening a bank account or getting telephone service. The catch is that you can’t rent an apartment to live in France in the first place if you don’t have a bank account, but if you’re not already renting an apartment, then you wouldn’t have an electric bill to open a bank account. (And if you don’t have a phone, how can the landlord reach you to let you know if you got the apartment or not?) It’s a cercle vicieux, and if you’re confused, don’t feel bad. The French are, too. It’s part of living like a local.”

In the US, we consider remodeling a home as the biggest test of a relationship with a significant other. Trust me, unless you have a crew that speaks no English and has no clue about what they’re doing or why they’re even there (and would you even hire or keep a crew like that?), a home remodel in the United States is a snap compared with undertaking one in Paris. One of the few saving graces in David’s journey was his wonderful partner, Romain, who encourages him not to be kind to his contractor and crew (don’t bake for them), and not to pay the contractor each time he was handed a bill (“You need to withhold payment for as long as possible. No one in France would ever pay a bill until the last possible moment. Make them soif [thirst] for it.”)

David’s edgy humor and self deprecating style, combined with his incredible talent as a baker and chef  — nearly every chapter ends with an appealing French recipe — keeps you turning pages.  His ability to keep readers engaged as we experience with him the joys and travails of life abroad, makes this book a very entertaining read. You’ll find yourself ready to get on the next plane to Paris for no other reason than to throttle the incompetent contractor and crew and to take David out for a conciliatory dinner. I loved l’appart. If you are one of the thousands of David’s fans — or if you want a good book that will make you laugh at the realities of a Parisian life, you’re in for a treat!

To “sweeten” the book, so to speak, here’s David’s recipe for Chocolate Souffle in l’appart. 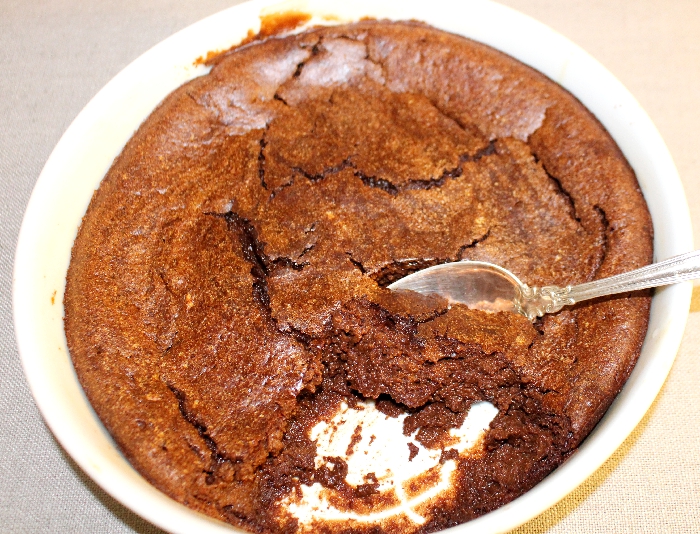