Dollars for A Doctorate — Theresia Ndirangu 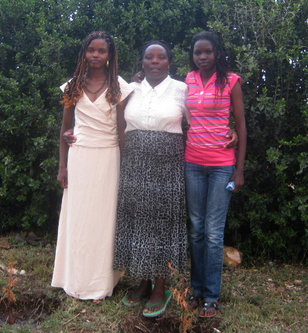 Theresia Ndirangu is a single, 42-year-old Kikuyu woman from Kenya with both the focus and determination to succeed at anything she believes in, despite having faced staggering hardships.  Her goal is to earn her Masters and PhD degrees in Applied Human Nutrition.  Her dream is to receive a masters and Ph.D., then to return to Kenya and work with an international organization in support of tribal women farmers.  As up to 80% of the farmers in developing countries, especially in Africa, are women, this is a critically important goal both for Africa and for the world.

Theresia was graduated second in her class with honors in 1993, earning a
degree in General Agriculture at the University of Nairobi.  She worked asa secondary school teacher for four years and has been employed by the Ministry of Agriculture as an extension officer since 1997.  She trains women farmers and extension staff in sustainable agricultural practices and is currently teaching home economics, focusing on food production, health and nutrition.  This is extremely important as the Masai and other nomadic tribes are
now farm-based but with neither farming nor nutrition experience or skills.

Theresia has been accepted to Brookes College in Oxford for work on a Masters degree in Applied Human Nutrition, and was to begin coursework in September 2010.  However, she was unable to find a scholarship in time to begin studies.
She has been granted permission to defer studies until September 2011
and has paid one thousand pounds toward securing her place at the college.

In 2009, the government of the Netherlands sponsored her for a short course in their country.  She has a passport and is permitted to travel internationally.

Theresia and I have been friends since 2005 when I launched the
International Tropical Farmers Network, an online group that connected
farmers, scientists, social scientists and others working with tropical farmers worldwide.  After being unable to secure a scholarship, she asked for ideas for a way to continue her education.  Given all that Theresia has done for women in Kenya, and given how much more she could offer if she receives a Ph.D., I am committed to helping her get through a year at Brookes.  I have no doubt that she will receive scholarships to complete her education once she is there.

The following is a more in-depth look at Theresia’s background and why she is so deserving of getting to Oxford.

Theresia was born in January 1969 in Nyandarua District in central Kenya.  Her mother was the second wife of an illiterate man who made his living as a driver for the Ministry of Labor. Theresia was the eldest of five children; when her father’s first wife died, her mother assumed the responsibility of raising six more children.  The family lived in poverty.

Theresia was not only quick in school but at a very young age, she learned to sew, knit, cook and manage a household. When she wasn’t at school she cared for her siblings.  She was always in the top ten in her class.  In the evenings she joined her older stepbrother to study together and he often coached her.  As her parents frequently could not afford paraffin for the lamps, they often studied by firelight. He encouraged her to go to university then get a good job and was a great inspiration to her.  Her English teacher was also an inspiration as he told her she was university material.  Her mother encouraged her as well, saying that only educated people could get good jobs.

When Theresia was in seventh grade her father nearly killed her mother.  The domestic violence was so bad that her mother fled with her five children and no funds or way to support them.  She finally got work as a casual laborer.  Her maternal grandmother then had a stroke and was paralyzed so Theresia’s mother was responsible for her as well.  It fell to Theresia to manage the other children while her mother worked.

In secondary school Theresia excelled enough to complete her coursework in two years and was accepted into Nairobi University.  Her goal was to be an agricultural officer as she wanted to bring food security to families like her own, as the majority of Kenyans, who are very poor.

After obtaining her degree she got a job as a biology and agriculture teacher in a secondary school.  Given that her mother, despite being illiterate, was determined that Theresia get through school, Theresia gave back by paying for the education of her siblings. (School is currently free in Kenya, but this is very new. Most African countries charge all children from fourth grade on for entry fees, uniforms, books and desks, which is why there is such a low rate of educated children.)

Despite the fact that Theresia earned very little, she paid the school fees for the children of parents who could not send their children to school in the community where she taught and she also provided food.  She says, “It used to move me when I saw very bright children at home for weeks due to lack of school fees and others having no hope of evening meals.  At times I could just give them the food I had bought for myself.  Sometimes I could give them a grant for the fees and at other times a loan.  Then, in 1997 I got my current job, which provided me with enough income to support two girls.”

The girls that Theresia raised (in addition to her own siblings and the children she helped while working as a teacher) are Mary and Teresia Waweru.  Theresia says, “I learned of the problems this family was going through when Mary was in class two of her primary education.  The children would go for up to three days at a time with one cup of porridge a day.  Sometimes their mother went without food so the children could eat…. Mary was expected to go to school and do as well as the others, but during break Mary had no energy to play.  She often stopped to sleep on her way home from school for lack of energy, only to have no dinner at night.   I took the two girls and raised them, coaching them at night so they could catch up in school. I did without all luxuries such as shoes or a new dress to save the life of those girls and mold their future so that one day they might be able to save a life or two themselves…. I would take them to see their parents for the December holidays.”

Mary and Teresia are now 19 and 17.  Mary just missed the entrance to the
University of Nairobi by a few points; hopefully she will be given a second
chance.  Teresia has just taken her exams for level 12.

With the additional schooling, Theresia will be in a position to expand on a
national and even international level, the work she already does with women farmers.  Through her career, she has found that the women have no knowledge of nutritional foods and which crops will best sustain their families.  “I teach them how to prepare the foods, food preservation, the nutritional value of the food, value-added crops, and kitchen gardening.  Additionally, I train them in crop production and conservation agriculture.

“Finally, I teach about HIV/AIDS and necessary nutrition for the affected and infected.  I trust that one day in the future, together with teaching nutrition and health, I will mobilize funds to support the children – especially girls – from disadvantaged families who cannot afford to support their education.  With proper education, girls can achieve so much.”

There is a well-worn axiom that is especially true in developing countries:  If you want something done, ask the women. Women are determined to care for their children and their communities.  This is why it is crucial that Theresia Ndirangu gets the necessary funds for a year at Brookes.  I have no doubt that given this opportunity, she will receive a scholarship to complete her training and to achieve her goals for the women of Kenya and other African countries.

Please join me in raising the dollars for Theresia’s doctorate.  Entry fees are $18,000.  She will also need airfare, health insurance and
living funds.  We may be able to place her with a family to save housing fees.  Raising $25,000 is not an overwhelming task, especially considering the impact her education will make on the lives of African women.

Tell a Friend:  Even better, let your network of friends know about Theresia. One dollar is less than a cup of coffee. If everyone sends one dollar, Theresia will get to Oxford!