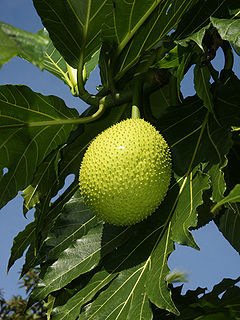 Breadfruit, Artocarpus altilis, is a species of flowering trees related to the mulberry, and came originally from the Malay Peninsula and possibly Polynesia.  The trees grow to around 66 feet in height, and can grow in salty and sandy soil. The tree produces latex (rubber), which is used for caulking boats. The flowers are pollinated by bats.  Breadfruit is one of the higher producing food plants, with up to 200 fruits per year.  The fruit is usually the size of a large grapefruit, although sometimes larger.  I prepared breadfruit in Tahiti and they were more the size of pomelos.  Breadfruit is a close relative of the breadnut and jackfruit.

The Polynesians brought breadfruit plant stock with them in their dugouts as they traveled the Pacific.  The wood is lightweight and impervious to termites and therefore useful for building dugouts. Lieutenant Bligh collected breadfruit as one of his HMS Bounty botanical samples and saw it as a potentially cheap source of food for slaves in the Caribbean.

Breadfruit is very starchy and can be prepared like potatoes: boiled, roasted, baked, etc.  It, apparently, can taste a bit like freshly baked bread, its namesake.  Tahitians roast it and then core it and fill the shell with corned beef or other foods.  Hawaiians at times mix breadfruit paste with taro to make breadfruit poi.  It is important enough in Polynesian cultures to have its own creation myth.

While doing research in Tahiti I stayed in a pension where we cooked breadfruit by boiling it and then mashed it with butter and salt.  It has a bland, delicate flavor, in the same way that white potatoes are bland and delicate.  I liked it a lot though I didn’t think it tasted like bread.

Jackfruit, Artocarpus heterophyllus, is a member of the mulberry family.  Its outer shell looks similar to the breadfruit except that it’s huge.  It is native to South and Southeastern Asia, and thrives in the tropical lowlands.  The fruits are the largest fruits produced on trees, weighing in at up to 80 pounds!  Although it takes three years for the trees to bear fruit, they then produce numerous fruits for over six months of the year.

The jackfruit was a part of early Indian agriculture, having been cultivated 3000 to 6000 years ago.  It is a common ingredient in the cuisines of most Asian countries.  It can be eaten whole when it’s unripe and the interior is eaten when the fruit is ripe.  It is served both raw and cooked.  Poor rural families in Sri Lanka use it as a substitute for rice.  I have never eaten jackfruit, but it is said to be an acquired taste, sort of like pineapple but not as juicy.  The seeds can be eaten cooked or baked like beans; they allegedly taste similar to chestnuts. The leaves are sometimes used as a wrapping. In many cultures, jackfruit is boiled and used in curries as a food staple.

The wood is used in several countries for making musical instruments, and is also used for roofs, window sashes and doors.  The heartwood of the jackfruit tree is used as a dye for the robes of monastic Buddhists.