When Lulu Sturdy inherited her uncle’s run-down Ugandan estate, she found herself alone on a failing farm in a war zone. Seven years on, she has built it into a Fairtrade phenomenon. 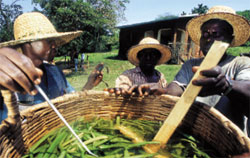 Two violent incidents brought me to where I am today. The first was the unexpected death of my uncle, the day after I arrived in Uganda to see him; the second, the attempted murder of my Ugandan farm manager, three years later. The first I came to see as serendipity, the second as rocket fuel.

Serendipity landed me, aged 30, on unruly Ndali farm, with its tourist lodge, in Western Uganda while its manager and visionary – my uncle, Mark Price – was being buried in Yorkshire. It was originally an emergency measure. I was expecting to be back within a couple of months making furniture near Chipping Norton – doughnuts, strong coffee, ear-defenders and biscuit jointer (my favourite “bodge-it” tool for avoiding a mortice and tenon) by day, a pint of Hook Norton and steak and kidney pie by night. Instead, these faded into the distance along with eight nephews and nieces, a five-year-long relationship, a red Ford Escort (an inheritance from my grandmother and which passed away during my first year away during a joyride around an Oxfordshire industrial estate), and heaps of books on Tibetan Buddhism.

Seven years on, I am still in Uganda, smitten with a rare gift: the liberating feeling from top to toe that I am in the right place, at the right time, doing the right thing, no matter what the complications. Curiously, I am in better contact now with my friends in England than I ever was when I was there. I think its is because I feel good in my skin, like I have come up from under water.

I inherited a mixed African farm of bananas, coffee, cattle, alcohol distillation, and 29 families in ramshackle houses that shouldn’t have been there – and Mr B, the then-farm-manager. It was making a roaring loss, not overly helped by Mr B, a defrocked priest, who was getting fatter and richer by the minute in inverse proportion to the farm’s performance as he wined and dined all the local administration. With the threat of reprisals heavy in the air, it took me three months of heated negotiations to see off Mr B with a golden handshake and a wildparty. Now we’re best of friends.

This was in a period when the Allied Democratic Front had strongholds in the Mountains of the Moon (the Rwenzoris) which overlook Ndali, and the group sporadically raided local villages, murdering and plundering. President Museveni personally arranged for our lodge to be protected by the army. For a year we had 12 soldiers stationed on the farm in trenches they dug themselves, and from where they used to busy themselves feeding our small troop of baboons, smoking marijuana, drinking Ndalidistilled banana gin and entertaining the village girls.

Then there was an attack with a panga (machete) on my new farm manager, Monday, when he disturbed a thief in his house. It left a chunk out the back of his head like a quarter-slice of apple. We learnt to dress the wound every other day with wild honey and gauze. The effect was phenomenal: it protected the wound from bacteria at the same time as it promoted growth of new flesh over the bone. But the shock of the attack made its mark on an HIV-positive patient and I nursed a bed-ridden friend for a year. He failed to pull through. But being beside Monday concentrated in me a positive aggression towards the farm’s future: nothing shouts “transitory” so clearly as death. Monday bestowed a type of rocket- up-my-arse blessing when he left me and Ndali behind.

My current farm manager is Kato, a small bundle of immense energy without whom I could achieve nothing and who constantly raises my morale and lightens my mood with funny stories. Although not a mechanic he’s more inventive than me at tying things on with bits of string and plastic bags and so doubles up as an excellent Ugandan driver of Be Nicer, our Land Rover.

Kato and Monday taught me that getting Ndali “right” was a question of good people-management and experiment. We set everyone on a bonus system. Having no mechanisation, everything was and still is done by hand so we slashed elephant grass and burned, then dug, re-dug, and planted. We tried, among others, rice, soya, maize, chillis, onions, and pyrethrum. Then I hit upon vanilla. It became my eating, walking, sleeping, talking, loveaffair nightmare. Vanilla is in my bedroom, in the loo, on the window- shelf, under the sink, in my pockets, stuffed in old socks, wrapped in cooking foil, sweating in containers, soaking in alcohol, strewn on the floor like confetti, and frazzling on the dashboard of Be Nicer. My friends say I stink of vanilla.

I’d been in need of a high-value, low-volume crop and one that could work financially on a small scale, that would be in harmony with the direction I wanted to take the farm in terms of ethos, challenge, scope for creativity. I didn’t want to change the existing character of Ndali – wild and hilly with lots of regenerating forest – so swathes of maize or acres of coffee were never going to fit the bill.

There was a drive in Uganda to help move export earnings towards non-traditional crops and I was awarded a small grant from a US-government funded project to establish vanilla. It became clear that to make a success of it on a small scale I was going to have to take it all the way down the line: grow it and buy it from others, cure it, extract it, package it, brand it, market it.

The decision to launch Ndali vanilla as Fairtrade was as much a business decision as it was ideological. I’d already built up a good, close, working relationship with a small group of vanilla farmers in the mountains. I gave them sales commissions from our own cured sales of their vanilla; most importantly, we trusted each other.  The logical step then for both parties was to help the farmers gain Fairtrade certification, enabling them to become more professional and independent with the support of a large “family” network and, at the same time, validating the Ndali brand in the eyes of the UK supermarkets.

I had no interest from these stores at first. Then I hit it lucky with the creative, open-minded buyer at Waitrose, who took time, three years ago, to really listen. When I called a year later, a little closer to my goal with a packaging prototype, the same buyer said: “We like to work with small businesses such as yourselves.” It was still a long way off from a “yes,” but I clung to my vision like a pit bull terrier.

In September last year my farmers became the first Fairtrade- certified vanilla growers (and still the only ones) on the African continent -aided by my close work for more than a year with the Fairtrade Labelling Organisation (FLO) in Bonn, and the UK Fairtrade Foundation, to establish what would be a fair price for green Ugandan beans. I now pay more than twice the current conventional price to Fairtrade growers.

Two months later Ndali Fairtrade vanilla was launched on Waitrose’s shelves and in various independent shops as the first-ever retailing Fairtrade vanilla. Hugh Fearnley-Whittingstall has kindly called it some of the best vanilla he has ever come across. In the meantime I have taught myself how to obtain pure vanillin crystals (the white compound that gives vanilla its typical aroma) on the surface of the best beans and how to produce vanilla extract from whole beans. But we still have an awfully long way to go.

Total sales to one supermarket amount to under 200kg of cured vanilla in one year. From10 tonnes of green beans Ndali produces 1,800kg a year of cured vanilla and could quite easily treble that production, especially since we are overwhelmed with farmers clamouring to join the Fairtrade network, which has grown from 50 to more than 600 farmers. But there are two obstacles: people are not used to using whole bean vanilla in their cooking (especially in savoury recipes) so volumes are always going to be on the low side, and I need another supermarket to stock our vanilla if branded sales are to make a real impact on farmers’ bottom lines here in Uganda.

In the meantime I am in negotiation with the Dutch and Belgian markets and am focusing on other avenues to spread my risk: offering to supply my “competitors” with our vanilla for their own brands, including the supermarkets; offering bulk vanilla prices to the major vanilla extract manufacturers, which also helps to absorb my smaller, grade-B beans; and we have had a serious enquiry from a specialist soap manufacturer. I am also developing a unique Ndali blend Fairtrade vanilla extract. My biggest mistake has been not to concentrate on these more stable, bread-and-butter, avenues earlier. Yet this may not have been feasible since the greatest blessing of being one of the first operators in the world to have Fairtrade vanilla has also been the greatest stumbling block – being ahead of the game can be frustrating, waiting for others to catch up.

The largest world consumers of vanilla beans are the US manufacturers of industrial vanilla extract (and other related vanilla products), such as McCormick and Danisco.  Their products go into ice cream, biscuits, chocolate and pastries the world over.  Both appear to be researching customer demand and the possible supply of Fairtrade vanilla beans. But giants move slowly and I still have a tonne of Fairtrade vanilla sitting in my curing house while we are about to start another harvest. I’m short-term gambling but I don’t want to let the farmers down by turning away their crop. I like to think that’s called burning bridges to achieve riches.