Sex, Love and the Vanilla Bean 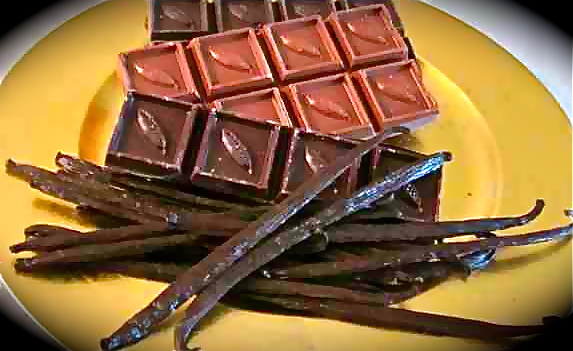 Ah, the delicious allure of romance, the intensity of a new infatuation, the rapture of falling in love. Pretty powerful stuff, the pleasures and passions of romance and love. Spring, summer, fall and winter, we’re in love with the idea of love. The perfume industry thrives on our desire to lure and captivate the object of our affection and vanilla performs an important role in the drama. While the romantic sunset at the seashore and that special song may make us swoon, taste and smell are big players in the game of love.

So, how does vanilla steal the show? Is it an aphrodisiac? Will it enhance our love lives? Let’s explore a few of the myths and facts surrounding the illustrious bean to see if, indeed, there are seeds of amorous evidence inside those sleek black pods.

In every language there’s some version of “the way to a man’s heart is through his stomach.” The first growers and users of chocolate and vanilla attest to this saying. The famous Azteca drink, Chocolatl, did not begin with the Azteca, but with the Maya. The Maya called the magic beans cacao from which we created the words “chocolate” and “cocoa.” The generous Maya shared with other Mesoamericans their fabulous beverage which, in addition to chocolate, included vanilla, corn, allspice, chile, and other flavorings. We can assume the Mesoamericans knew of chocolate and vanilla’s alleged power since both cocoa beans and vanilla pods were valuable enough to be used as money. When money grows on trees and vines it’s bound to be a source of interest with the locals. The Azteca claimed the drink as their own after conquering the people of the lowland tropics. They then taxed the Maya, Totonaca, and others, and demanded payment in cacao and vanilla beans. This insured that the king always had a supply of sexy ingredients in the royal pantry.

As the Aztecas generally frowned on the use of alcoholic beverages, Chocolatl was their drug of choice and was enjoyed by royalty, nobility, and warriors. It was served after banquets along with smoking tubes of tobacco in the same way that brandy and cigars are now served after a celebratory meal. Bernal Diaz was Cortes’ right hand man at the time of the Conquest, and as an old man he wrote about their adventures. He said that the Azteca Emperor Moctezuma ate frugally at the great events, but drank as many as 50 cups of Chocolatl, which was said to be the reason for his success with women. Although we can’t ask Moctezuma his opinion of Chocolatl, he was known to maintain a large harem.

The Spaniards were sufficiently enough impressed that they returned to Spain with news that chocolate and vanilla were an erotic duo. Chocolate and vanilla were made into an all-purpose drink that quenched one’s thirst, warmed the body, served as a medicine, and acted as an aphrodisiac. In the curious medical beliefs of the time, chocolate was considered “cold.” It therefore was good for the body. Vanilla, on the other hand, was considered “hot.” Denis Diderot, a French intellectual in the 1700s, and a prolific writer on many topics, believed that while chocolate was good, many of the additional flavorings added to it were bad, unless you were in an amorous mood. Like many of his contemporaries, he warns: “The pleasant scent and heightened taste it (vanilla) gives to chocolate has made it very popular, but long experience having taught us that it is extremely heating, its use has become less frequent, and people who prefer to care for their health rather than please their senses abstain completely.” It makes one wonder how many people then – and now – cared more for their health than their chocolate.

By the 1600s, vanilla was considered a flavor worthy of being served on its own merits. As vanilla was “hot,” the doctors of the time believed that those who used it got “hot” as well. In the 1700s vanilla was recommended by physicians and alchemists to be drunk as a tincture or infusion in order to ensure male potency. Bezaar Zimmermann, a German physician, in his article, “On Experiences” (1762) claimed that, “No fewer than 342 impotent men, by drinking vanilla decoctions, had changed into astonishing lovers of at least as many women.”

Thomas Jefferson is credited with vanilla’s arrival in the United States. When he returned from his ambassadorship in France in 1789, he was dismayed to discover that no one in the States knew about vanilla, so he wrote his French attaché requesting that he send him 50 vanilla pods. Clearly Jefferson’s personal passion was well received since soon it was used as a flavoring and a medicine, and – you’re right – an aphrodisiac. In the 1800s Dr. John King, advised in the American Dispensatory, that one should use vanilla to, “stimulate the sexual propensities.” He went on to give a very carefully detailed recipe for a decoction promising amorous evenings. If the good doctor was right, a hefty swig of vanilla extract before bedtime could work like a charm.

While some drank vanilla in their pursuit of love, many others found that its delicate persuasive aroma was just as powerful. The Totonaca wore vanilla beans in their hats and used it to perfume their homes, a practice they continue today. They used the oil from the drying vanilla beans to rub on their skin until their bodies glistened. The Europeans – especially the French – created perfumes from vanilla pods, not only to wear but also to fragrance their tobacco and snuff. When vanilla extracts came onto the market at the end of the 19th century, more than a few savvy women dabbed a little behind their ears and onto their wrists, thereby creating the ultimate in perfumes – a sensual aroma that also conjured up the homey pleasures of food fresh from the kitchen. Smart modern women have found that fragrances with strong vanilla notes draw an attentive audience with minimal effort.

In controlled tests designed to better understand the connection between smell and sexual arousal, Dr. Hirsch had volunteers wear masks scented with an array of odors. Several fragrance combinations were found to be very effective in increasing penile blood flow. These included lavender and pumpkin pie, doughnut and black licorice and pumpkin pie and doughnut. However, mature men were most aroused by just one simple smell…vanilla! Modern science has proven what native people figured out centuries ago, and many of us discovered on our own — whether you prefer to eat, drink, or smell it, vanilla is definitely a potent character in the arena of love!

In the past, alleged aphrodisiacs were so rare and expensive that only royalty and nobility were permitted to use them or could afford to indulge. As kings and noblemen saw no earthly reason to share the wealth, it’s only in the past two hundred years that folks like us could conduct our own unbiased research. So where do you start? In our product boutique of course! All the ingredients are waiting there for you. All you need to do is to apply them to your daily life!