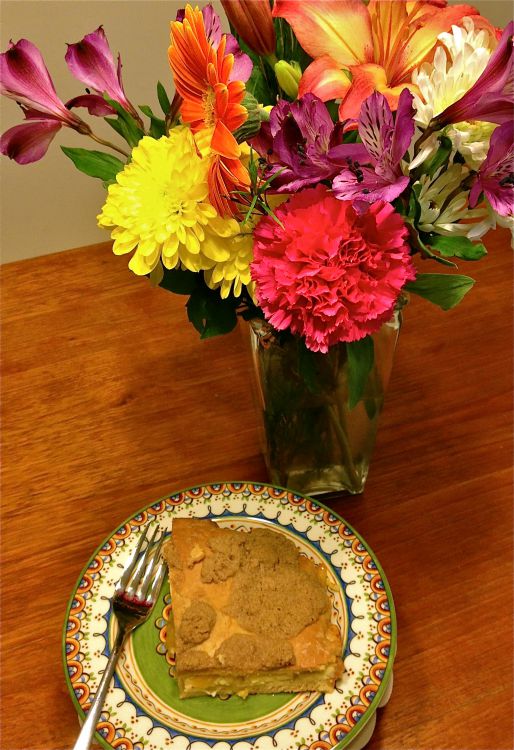 Most coffee cake recipes, especially ones for winter, call for canned pineapple, but here the glistening fresh fruit layer is made from scratch and accented with pure vanilla, a most complementary culinary pairing. To choose a ripe pineapple, look for a strong sweet fragrance and yellow-brown skin that is not too green; the leafy crown will be a bright green and an inner leaf will detach easily when plucked from the center. Adapted from an old recipe clipped from Bon Appétit magazine decades ago, it is quite perfect in flavor and texture, and easily serves a large crowd. This is simply one of the best homemade coffeecakes.

For the filling, peel, core, and chop the pineapple. Use a sharp knife to cut off both the crown and bottom. Cut away the skin and carve out the “eyes.” Cut into four quarters lengthwise and core. Coarsely chop and place in a large heavy non-reactive saucepan. Add the sugar and lemon juice. Bring to a boil and then reduce the heat to simmer, uncovered, until the liquid is almost completely evaporated, stirring frequently, about 30 minutes. Stir in the vanilla and set aside to cool completely. May be prepared a day ahead and refrigerated. Bring to room temperature before using.

For the dough, combine 1 cup of the flour, the sugar, yeast, and salt in a large mixing bowl or the bowl of a heavy-duty electric mixer fitted with the paddle attachment. Heat the milk with the butter to 120º in a saucepan or microwave oven. Using a large whisk if mixing by hand, add the hot milk and vanilla to the flour mixture and beat until well combined. Add the eggs, one at a time, blending well after each addition. Add the remaining flour 1/2 cup at a time to make a very soft dough that just clears the sides of the bowl, switching to a wooden spoon when the whisk becomes clogged.

Turn the soft dough out onto a lightly floured work surface and knead gently until smooth, yet still very soft, 1 minute for a machine-mixed dough and a hand-mixed dough 2 to 3 minutes, dusting with flour only 1 tablespoon at a time, just enough as needed to prevent sticking. Place the dough in a greased container, turning once to grease the top.

Cover with plastic wrap and let rise at room temperature until double in bulk, about 1- 1/2 hours.

Meanwhile, prepare the cheese filling and the crumb top. For the cheese filling, beat the cheese, sugar, eggs, and vanilla in an electric mixer until very smooth and creamy. Refrigerate until needed. For the crumb top, in a small bowl, combine the flour, sugar, and cinnamon. Cut in the butter pieces with your fingers, a pastry cutter, or a food processor until dry coarse crumbs are formed. Do not overmix or the crumbs will clump.

Preheat the oven to 350 degrees F. Line a 12-by-18-by-1-inch baking sheet with parchment and grease the sides. Turn out the dough onto a lightly floured work surface and divide in half. With a rolling pin, roll out half of the dough to a 13-by-19-inch rectangle. Fit into the prepared pan, pressing to fit up the sides. With a large spatula, spread all of the cheese filling over the dough in an even layer, leaving a 1/2-inch margin all around.

Spread the pineapple filling over the cheese filling. Roll out the remaining half of the dough to a 12-by-18-inch rectangle. Gently set atop the fruit layer and tuck the edges into the sides of the pan to contain the filling. Crimp the edges. Sprinkle with the crumb top and set aside to rest at room temperature 15 minutes.

Bake the cake on the center rack of the preheated oven 35 to 40 minutes, or until golden brown and firm to the touch. Place the pan on a rack to cool. Serve in squares cut from the pan, warm or at room temperature.