Oaxaca and the Virgin of Juquila 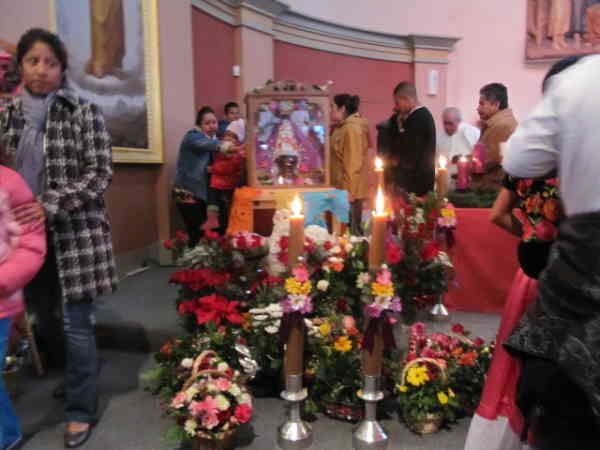 Although the weather outside never broke 50 degrees and I never left town, today I spent several moving hours in the tropics, specifically Oaxaca, participating in the annual celebration of the Virgin of Juquila, the patron saint of Oaxacans and the protector of those faced with great difficulties.

Last Thursday  I went to Staples to copy some fliers for my booth at a holiday fair. I met a Oaxacan family there, and after chatting with them in Spanish for about fifteen minutes, they graciously invited me to join them on the west side of Santa Cruz where, for two days, there would be masses in honor of the Virgin of Juquila, as well as a procession, music, food and traditional dances. I immediately accepted. 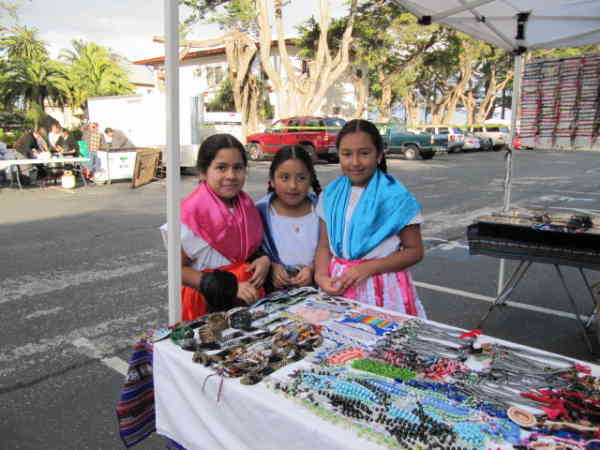 untains of Oaxaca, which slowly give way to valleys and ultimately, the Pacific. Like Veracruz, Oaxaca’s traditional culture remains strong, and includes several different indigenous groups. And, as in the mountains of Veracruz, many of the people in the small villages tucked amongst spectacular scenery speak little or no Spanish. A couple of times I had hoped to make the journey over the unpaved roads into the mountains of Oaxaca, but the plans never materialized.

So today, the 8th of December, day of the Virgen de Juquila, I entered the sanctuary of St. Joseph and joined our Oaxacan community in a mass in honor of the Virgin and got a glimpse of the culture they brought with them to the north. I arrived on time and found the chapel half full of families, all bundled in shawls, jackets and sweatshirts, small children running up and down the aisles and little girls dressed in beautiful huipiles (hand-embroidered tops) and long skirts, their black hair braided, some with ribbons and flowers in their hair.

One little girl had on a scarf, her hair having fallen out from chemotherapy. Her face was rounded from the steroids, which accentuated her dimples and made her even more beautiful. She joked and teased with the other little girls her age all sitting in the front row of the sanctuary. Every so often she’d wave to her family who were sitting behind me.

Eventually the chapel filled and about twenty minutes after the mass was supposed to begin, the band began to play. A tuba, two trombones, two trumpets and a snare drum filled the chapel with traditional Oaxacan waltzes. What the musicians lacked in skill was made up for in enthusiasm; the music bounced off the walls and collided with itself as it circled the room.

The priest arrived with a small procession of Oaxacan church members, all of whom settled in the front of the chapel to the right of the Virgin, who was ensconced in a glass box and surrounded with roses and beeswax candles in flower-covered candlesticks. The American priest wore a robe with the Virgin of Guadalupe and roses painted on the front. 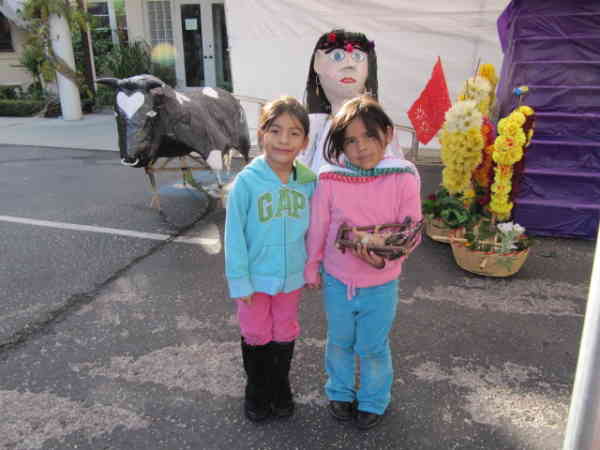 The service was entirely in Spanish, and included church members reading passages from the bible. Periodically the band blasted another waltz, once accidentally, when the priest was still reading. No one minded. Nor did they mind the children who roamed around the chapel, giggling and whispering to one another while parents and older siblings prayed.

When the service drew to a close, a lace train was attached to the box holding the Virgin and was held aloft by two men. One of them was the father of the little girl with cancer. He held her in his free arm and she held the edges of the center of the train. One by one, the pilgrims passed under the train, kissing their hands then touching the beautiful brown Virgin with long, straight black hair and a white raiment that covered her from neck to well past her feet. Buckets of flowers were brought in and those who passed under the train took flowers into their hands and added them to the offerings of flowers, bread and even the baby Jesus in a rustic cradle. 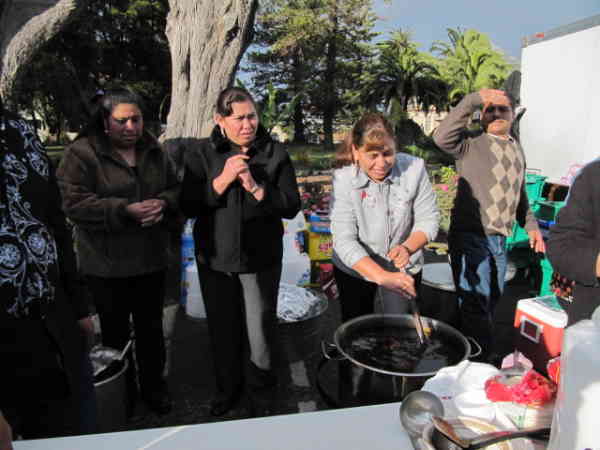 After respects were paid to the Virgin, we gathered in the courtyard. There was a stage set up with large, papier-mache figures and decorative papel-picado banners blowing in the breeze. Under canopies there were long tables and benches where everyone sat, anticipating the celebratory meal. Another canopied area was for the band members who were joined by more tuba, trumpet and trombone players and two more drum sets and drummers. Young dancers shivered in the cold wind, while tortillas were warmed on the griddle and large metal pots filled with mole were heated on propane stoves. The music blared waltzes and marches, children waved small flags and ran around, adults and teens dined and watched dancers, drank Coca-cola and shared stories.

If I squinted my eyes, I could imagine us in the mountains of Oaxaca, complete with the winter chill that happens there as well. I thought about the beloved brown Virgin of Aquila and said a prayer to her for the beautiful little girl with cancer, that she might live to be one of the dancers, perhaps being a mother and eventually, a matriarch, a bearer of a beautiful tradition and filled with the blessings of her patron saint.