Madagascar and Bourbon vanilla are actually the same.  I’ll explain: 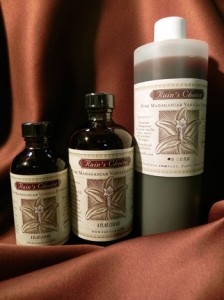 Vanilla planifolia, is the species of vanilla most commonly used in extracts. Vanilla planifolia stock originated in Mexico, vanilla’s birthplace, but cuttings were taken to other tropical countries beginning in the 1700s. In the 1800s, the French developed large plantations on Reunion, known then as the Ile de Bourbon, which is how the name Bourbon came into being. Although vanilla extract is high in alcohol content, it is not made from Bourbon whiskey.

Originally the term Bourbon referred to vanilla beans grown anywhere in the Indian Ocean region. As Vanilla Planifolia was planted in other countries, the name followed along.  As a result, Bourbon vanilla may or may not be from Madagascar, though increasingly vanilla beans are referred to by region rather than by this generic name.

Bourbon and Mexican vanillas are very similar in flavor as they’re from the same species, but there are special characteristics with each as soil and rainfall differences create subtle flavor changes.  They both have the familiar natural vanillin flavor that we associate with vanilla ice cream and other vanilla-flavored desserts and beverages. Madagascar vanilla tends to be a little stronger in flavor than Mexcian.  Madagascar/Bourbon vanilla contains earthy, hay-like, spicy and creamy notes.  Use Bourbon vanilla in baked goods, ice cream and anything where a traditional vanilla flavor is desired.

Indonesian vanilla can be much like Bourbon vanilla, or it can have very distinctive differences. Some growers harvest their beans too early, which gives the vanilla a more woody, phenolic flavor. As the early harvest keeps the beans from fully developing their flavor profile, it can be harsher and not as flavorful. It’s important to note that not all Indonesian vanilla is harvested too early; premium grade Indonesian vanilla that is properly cured is excellent.

Papua New Guinea (PNG) vanilla is becoming more popular in the world market as the price is quite affordable.  What makes it unique is cross-planting, with both Vanilla planifolia and Vanilla tahitensis growing next to one another.  Cross-pollination by insects occurs and the flavor changes as a result.  PNG vanilla is cured and dried exclusively in the sun rather than using the Mexican or Reunion methods of curing and drying the beans.  The beans tend to be sweeter as a result.

Other Vanilla Producing regions include Uganda, Kenya, India, some Pacific islands such as Fiji, Central America and Hawaii.  All of the planifolia species of vanilla will taste very similar.

Nearly all vanilla beans are grown without synthetic fertilizers or pesticides. First, vanilla thrives with only a light compost of forest materials.  Secondly, if it is properly raised, it has few natural predators.  Finally, most farmers cannot afford chemical treatments for their plants as they have very small plantations.  At the same time they cannot afford organic or fair trade certification.  Our naturally grown vanilla is purchased ethically.

Purchasing vanilla products from The Vanilla Company helps us to continue our work with farmers in the tropics. Thank you for your support.