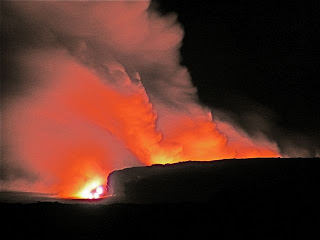 Okay, I’m old enough to remember when lava lamps first came out. I never owned one but I definitely found them a source of great entertainment, especially after a drink or two.

Now I can tell you that as cool as they are, they don’t stand up to the real deal!

On the evening of October 24th I went to the village of Kalapana on the Big Island to the Kiluea lava flow. I wasn’t sure I could actually watch the pyrotechnics as I’m extremely sensitive to sulphur dioxide. Didn’t want an asthma attack to ruin an otherwise thrilling adventure.

“Not to worry,” I was told. “The steam, sulphur, ash and other gases drift north to the Kona Coast.” I certainly can attest to that as most of my stay in Kona was clouded by vog. Bouyed by this news, I was ready!

We arrived not long after dark. As the show runs 24/7, you can go at any time, but it’s far more dramatic from sunset on. The park requires all visitors to have individual flashlights; headlamps are even better. After parking the car, we followed a path that leads over the lava to the prime viewing area. This means walking over pahoehoe lava, the smoothish kind, along with razor-sharp a’a’ lava, jagged shards of broken lava. There is a designated path with yellow errors leading visitors to the prime display area. The walk requires a certain level of concentration as there are treacherous sinkholes and crevices everywhere, none of which would be fun to encounter head-over-heels.

After fifteen minues of thoughtful navigation, we arrived. My hosts threw down blankets and set up a tripod and camera. The photos in this blog are the work of my host, Conrad Mertel. You can also go online to http://www.letsgo-hawaii.com/volcano/lavaflow.html to see the most current map of the lava flow. As of this writing, the map is for October 24th, the night we were there.

Activity varies night-to-night. We drew a lucky card. People who went two days later saw hardly anything. In our case, we could see a thin flow of red magma moving down Kilauea from the Royal Gardens subdivision, which has been completely overtaken by the lava. The lava disappears into vents, reappears further down, then drops into a long vent before surfacing to pour over the cliffs into the sea. 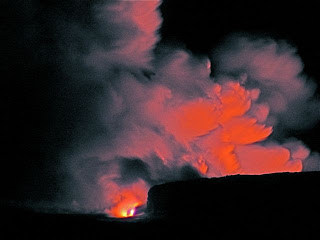 My hosts took a boat trip recently that goes out before dawn and gets relatively close to the cliffs. This provides an unparalleled view of the display. However, it also means breathing a lot of gas and ash. According to them, the water reaches temperatures of 800 degrees Fahrenheit. This night, the waves were breaking on the cliffs with a large spray upward, creating massive clouds of steam, ash and gas, which fortunately really does blow Northwest.

Periodically we could see rocks and boulders burst into the air at the edge of where the magma surfaces from the vent. I can’t come up with a better word than spectacular to describe the beauty of the lava flow, the waves, and the billowing clouds.

There was a secondary show, one I hadn’t considered until I looked up. Because there are no lights and because there’s no point in having flashlights on once you’re settled, there is no ambient light to interfere with the planetary exhibition, showing simultaneously in “Ampitheatre B.” The sky was enormous that night, clear and bright, the kind of perfect you see at the planetarium except that this was the real deal. Shooting stars arced across the sky and the Milky Way stretched forever.

We sat quietly for nearly two hours, joined by a crowd of equally awed viewers. Better than television, and with no movie houses outside of Hilo, this is a prime source of entertainment for both tourists and locals.

Walking back over the desolate lava fields, a few ferns poked up through the cracks, the first plants to emerge post-eruption. Then I noticed something scurrying across the lava — cockroaches! Of course! Cockroaches can survive just about anywhere, even at the ends of the earth. 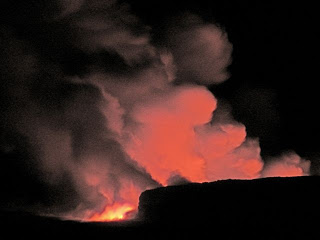