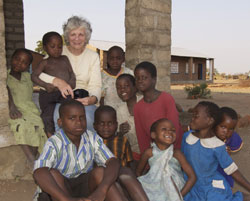 You would think that after raising seven children Mary and Bob Burns would be ready to retire.  In fact, after their children were grown, they moved to their mountain home in the California Sierra and lived a contemplative life filled with meditation, reading and hiking.  It was a beautiful period in the lives of two people who committed to a spiritual journey together nearly 60 years ago.  But it wasn’t enough.  They wanted to do something that addressed their desire to give back.

As their grandchildren were born, they moved to Mountain View in the Santa Clara Valley to be more actively involved in their lives.  It was during this time that they met

Father Peter Mulomole, a Catholic priest from Malawi who was working on his PhD in Berkeley.  Through Father Mulomole, they learned about the desperate poverty in Malawi, the fourth poorest nation in the world.

While Malawi is known as the heart of Africa. because of the loving nature of its inhabitants, the stark reality is that the country has suffered from severe drought for years, subsistence crops have been limited and of poor quality, and the people suffer from malnutrition, malaria, water borne diseases and AIDS.

Mary and Bob felt called to make a difference.  They decided that the greatest impact they could make to break the cycle of poverty in Manyesa, where Father Mulomole was from, was through supporting education. In January of 2006 they created the Kasimu Education Fund (KEF), a 501 (c) 3 tax exempt, non-governmental agency and started to raise funds.

In July of 2006, Mary attended the second Women Leaders for the World (WLW) program at Santa Clara University, a brilliant collaborative effort of the Leavey School of Business and the Global Womens Leadership Network.  Her playful, high energy, her humor and the wisdom she has garnered throughout her lifetime, were an inspiration to her colleagues at the training.

When KEF launched, there were no classrooms for the first four grades in the grammar school that served eight villages. They raised the funds for new classrooms and a prayer house that is used for classes and a school assembly hall during the week. The villagers made 160,000 bricks by hand to help in the construction of the classrooms and 200,000 bricks for the prayer house.

The Fund provided workbooks for all the children, uniforms for those who could not afford them, scholarships for high school students, an administration building for the school, monthly stipends for all teachers and aides, rocket stoves for the mothers to cook the daily meal and uniforms and balls for the school sports teams.  KEF additionally provides a daily food program for all children attending school.

There is a great shortage of teachers in the Manyesa region so KEF created a scholarship program for students interested in attending teacher’s college.  In exchange, the students will return as teachers for the schools for a five-year commitment.

While their primary focus has been on the schools, Bob and Mary also started a micro-loan program to improve the economy of the villages.  The local chiefs of the eight villages served by the school have written KEF to express their gratitude for providing the first signs of hope for their people

In 2008 Mary and Bob traveled to Manyesa to visit the villages affected by their work.  Home to over 5000 people, the region has no electricity, running water, paved roads or motor vehicles. Their son Patrick, owner of Still N Motion, a documentary filmmaking business, and his daughter Sara joined them and created a video, which is part of a nearly completed documentary on Manyesa, Malawi and how KEF has changed the lives of the families in these eight villages.

Bob and Mary are an extraordinary example of how we can each make a significant contribution to our planet and its inhabitants regardless of our age or assets.  Please visit the Kasimu Educational Fund web site at www.kefmalawi.com to learn more about their program and how you can become involved.