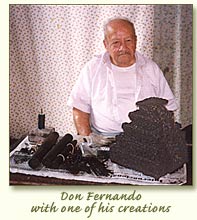 When I first met Don Fernando in October of 1994, I was already in possession of a small crucifix made by his niece, Rocio, a gift from a visit to their home in 1992 while passing through Papantla. Don Fernando was away for the day so I was charmed by the family’s stories of their life in Papantla, of their cat that played the guitar, but mostly, about Don Fernando. His presence was everywhere — the tools of his trade, displays of his remarkable craft, photos and awards displayed on walls or placed in books and brought out for the American guest.

When I returned in 1994, I was greeted as a friend and immediately introduced to Don Fernando, the family patriarch. Fernando was a small, unassuming man with a passion for his work. In most respects quiet and retiring, he would come alive as a magnificent storyteller at his work-bench as his still nimble fingers twisted, bent, shaped, and tied supple vanilla beans into works of art.

Fernando’s grandparents came from Spain in the time of major immigration to tropical Veracruz. The family settled in Papantla and coastal Tuxpam, working in agriculture and livestock ranching. This was a period of expansion and excitement and the vanilla industry was flourishing. By the time Fernando was born, Papantla was a wealthy community and tourist destination for Mexicans with the means to travel.

Fernando remembered his trips on horseback with his father through the rolling hills from Papantla down to the steaming tropical town of Tuxpam to visit family. When the Revolution broke out Fernando was quite young and his stories vividly depicted the horrors of the war as observed through the eyes of a child but with the historical perspective of an adult. It was through Don Fernando and others who lived through the war that I learned about its devastating effect on the people in the countryside, especially the indigenous of Mexico. Don Fernando held me in rapt attention as he described the years when vanilla was Queen in Mexico, when there were 21 casas de beneficios in Papantla, large family businesses where the vanilla was cured and dried, how his beautiful younger sister Eloisa charmed her way into the homes of high society, thereby opening the door for her big brother to join her at the fabulous balls and midnight buffets of the wealthy. Fernando described the days when the plaza was a sea of white as the Totonacas came in from the ranchos for the festival of Corpus Christi, riding the finest horses, the women adorned with exquisite gold filigree jewelry. This was the bella epoca, when life was good.

Life changed, imperceptibly at first, affected by the years during the Revolution when the vanilla industry shut down, then by the fierce competition from the Bourbon Islands in the Indian Ocean, a faraway country that captured the vanilla industry and broke the monopoly Mexico held for hundreds of years. By the mid 1920s, Fernando’s father Sotero knew that the industry was in grave danger. He decided to parlay his avocation as a wood carver into a vocation as artisan, creating magnificent figures and ornaments of vanilla. During his lifetime he crafted exquisite ornaments for European royalty, museums, and world expositions, all constructed from the finest Mexican beans.

Fernando was young and restless; becoming an artisan in his twenties held little fascination for a man with an inquisitive mind and a yen for travel. He worked with family in the livestock industry, traveled yearly to Southern California and Arizona, and lived a life of adventure. Then his mother suffered a stroke and his father was unable to support the family alone. Fernando returned home and assumed responsibility for the care of his family. In 1950 he went into the family business and discovered that he had the hands and imagination for creating fine art. At the time of his father’s death, he was a master craftsman, supporting not only his bedridden mother, but also his beloved sister and her daughter. Throughout his life he unflinchingly remained devoted to family, never marrying himself, but instead, assisting his sister in raising his niece, Rocio.

Over his lifetime Don Fernando received considerable recognition for his art. In the 1990s he was the subject of several documentaries in Mexico and Japan. His decorative work is in museums and possessed by royalty — he even made artifacts for the Pope. His family was probably more taken by his celebrity status than he was. He really preferred to visit with friends and guests while he replicated the Pyramid of Niches or the flying Voladores from fragrant beans. I sat with Don Fernando for hours, recording his stories and watching him work. Until his mid-eighties, he never wore glasses, which never ceased to amaze me as I watched his needle pull through the beans and his fingers create the delicate and intricate weaving of baskets and bowls. 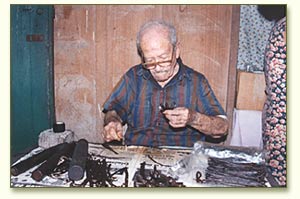 In 1997 I returned after a year two-year hiatus while I cared for my elderly, ill parents until their deaths. Don Fernando and Dona Eloisa, themselves old, understood loss. Dona Eloisa announced in her distinctive cackling voice that I would not be without parents, that she was now my mother and her brother my father. I was deeply honored by how these two dear people adopted me, and I took my position in their family seriously.

In 1998 I had the great pleasure of having my daughter and son-in-law join me for the first time in Papantla. Eloisa, who was by now losing her eyesight, peered up into my daughter’s face and announced with glee that she was her grandmother, and welcomed her into her life. We documented the family, and especially Don Fernando and his work, on video. This will be part of a documentary of the history and culture of Papantla, and the vanilla industry. I remember when I left that year Eloisa cackled, “Now don’t stay away too long. We’re old and we might die on you at any time.”

When I arrived at their home in March of this year, I found Don Fernando and Dona Eloisa, sitting quietly together in the near dark of the bedroom. Fernando’s face lit up when he saw me, saying, “Eloisa, Eloisa, Patricia is here!” Eloisa let out a great wail, and pressed her frail body against me, sobbing in my arms. I sat on the bed with my arms around them, holding them to me like two small children. Tears slipped silently down my cheeks. We remained this way for a long time, then I brought out my gifts to them: simple things I knew they loved — plump dried apricots from California for Don Fernando, a special gift for Eloisa. My trip was shorter than I would have liked and filled with collecting details for my upcoming web site and my involvement with the newly-formed Consejo Veracruzano de la Vainilla. It was difficult not to spend more time with them. Eloisa was suffering greatly from pain and appeared likely to die soon. Fernando — now 93 — was simply baffled at his longevity. No longer able to work, he wiled away his time sitting in the family room, observing the activities of a family that has a constant stream of visitors passing in and out throughout the day. Mexican vanilla is currently expensive and scarce, so the family business sits idle as Rocio waits for the prices to drop enough to begin again the art she learned from her uncle.

In early September I received word that Don Fernando had died quickly and easily of a heart attack. It would not surprise me if Dona Eloisa follows soon, as she and her brother were so close that they each finished the other’s sentences. I feel sad knowing that when I return this winter there will be no more stories, that I can’t ask Don Fernando to tell me once again about the golden days of vanilla in Veracruz, of the dances and parties and excitement when the city was filled with visitors and everyone traveled by horseback through the countryside, when Papantla was wealthy and redolent with the aroma of vanilla drying in the courtyards and streets, when it was known as “the city that perfumed the world.” Thank you Don Fernando, for so generously sharing your life, your art, and a glimpse of the time when vanilla supported Veracruz and life was good. My gift, in return, is to write your stories so they — and you — won’t be forgotten.