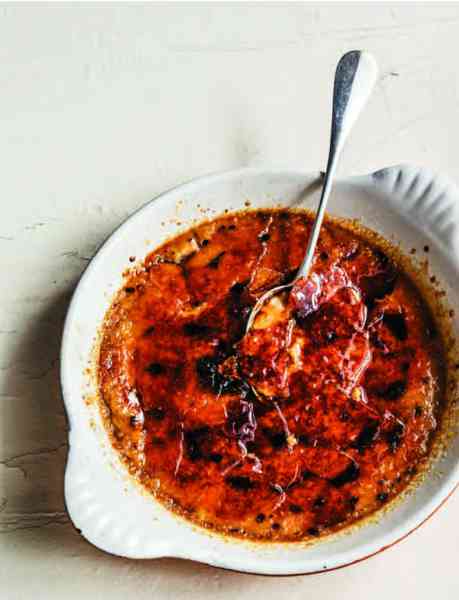 David Lebovitz is a master dessert maker and a good instructor as well. Although his recipe didn’t include vanilla, a little bit can only enhance the coffee and cream.

Put four individual gratin dishes on a high-rimmed baking sheet (also known as a jellyroll pan) or in a roasting pan big enough to hold them.

In a small saucepan over medium heat, warm the cream, milk, sugar, and salt until the sugar is melted. Add vanilla paste or extract.

In a bowl, whisk together the egg yolks. Gradually add the warm cream mixture to the egg yolks in a steady stream, stirring with the whisk (but not too vigorously; you don’t want to create foam), until the cream is completely incorporated. Mix in the espresso powder and strain the mixture into a large measuring cup, or another vessel with a spout, then stir in the Kahlúa.

Divide the mixture among the gratin dishes. Put the baking sheet of custards on the oven rack and pour enough hot water onto the baking sheet so that it reaches at least halfway up the sides of the gratin dishes. Bake the custards for 20 to 25 min- utes, or until they are just set; watch them very carefully during the final few minutes of baking. When you jiggle the pan, they should just barely quiver. Remove the custards and set them on

a cooling rack. (A wide metal spatula works well for lifting the hot custards from the water; be careful, as the custards are hot.) When cool, refrigerate until ready to serve.

To caramelize the custards, sprinkle the tops with an even layer of sugar. It should be enough to cover the top, but not too heavily—11/2 teaspoons for each is about right. Using a blow- torch, wave the flame over each custard, one at a time, until the sugar melts and then browns. You may need to lift and swirl the custard so that the caramel flows evenly across the top. If so, be extremely careful because the caramel is very hot and any drips will cause a painful burn. Serve immediately.

variations: To use six (4-ounce/125ml) ramekins (or custard cups) instead of the gratin dishes, prepare the recipe as described above, snugly cover the baking dish filled with ramekins with aluminum foil, and bake the custards at 325ºF (160ºC) for 30 to 35 minutes, until they are just about set, but still a bit jiggly.

To make vanilla crème brûlée, replace the coffee and coffee- flavored liqueur with 1 teaspoon of vanilla bean powder or paste. Using paste will make the custard a slightly tawny color. Similarly, you can split a vanilla bean lengthwise and scrape the seeds out, then place both the seeds and the pod in the warm cream for 1 hour (as indicated in step 3). Remove the pod and finish making the custard with the vanilla-infused cream.