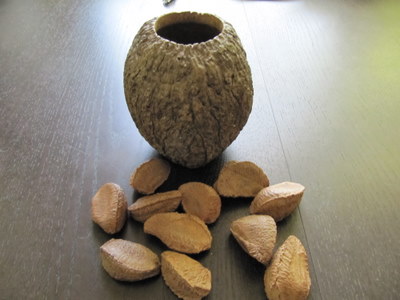 Brazil Nut, Bertholletia excelsa, is native to Brazil, Venezuela, the Guianas, Eastern Columbia, Peru and Bolivia.  It grows in scattered forests along the banks of the Amazon, Orinoco and Rio Negro rivers.  The Brazil tree is enormous, one of the largest in the Amazon rainforest, growing to 150 feet.  Additionally, it lives to well over 500 years, sometimes as long as 1000 years.  The trees cannot be effectively grown in plantations, as they need specific bees as pollinators.  Hand pollination is impossible, due to the trees being so tall, with long straight trunks and branches that start high in the forest canopy, and the fact that the flowers bloom only briefly once a year.

It gets more complicated.  The Brazil tree has flowers that need to be uncoiled in order to be pollinated and, similar to orchids, the pollinator must be able to reach deeply into the flower to pollinate it.  As a result, a particular orchid that does not grow on the tree must be located nearby in order for the tree’s flowers to be pollinated.  The male euglossine bee needs to have a specific smell to attract the females.  He gets this smell from the orchid’s nectar, as he pollinates.  The female then pollinates the tree’s flowers.  No orchids, no bees; no bees, and the trees don’t produce fruit.

New trees don’t fruit for over ten years.  When the tree is pollinated, it takes about 14 months for the fruits to reach maturity.  The fruit is an endocarp, which looks like the inner hairy husk of a coconut, but without the hair, is hard and weighs four or five pounds.  Inside this husk are the Brazil nuts, which are actually triangular seeds, arranged like the membranes of an orange.  The trees can produce up to 450 kilos of nuts a year!

The complicated cycle of Brazil nuts continues.  There is only one rodent, the agouti, a large rat, that can gnaw open the Brazil fruit’s husk.  It eats some of the Brazil nuts and then buries the rest.  A few of the seeds germinate, perpetuating the cycle of the trees.

The majority of Brazil nuts are harvested in Boliva, with Brazil second and Peru third.  The harvesters must go deep into the forest to gather the nuts.  Harvesting is at the end of the rainy season, when the nuts begin to fall.  They are quickly gathered so that fungus doesn’t attack the fruits.  The castaneros (nut gatherers) are indigenous people living on the edges of the Amazon.  In Brazil, many of these people were runaway slaves who moved into the forest and intermarried with the native indigenous peoples.  Through fair trade programs, these people have been encouraged to not only gather the Brazil nuts, but to use the husk in craft making.

Brazil nuts are very high in oil content, more so than macadamia nuts, and the oil is nutritionally premium quality.  However, it goes rancid quickly, which is why it isn’t marketed commercially.  The nuts are high in selenium, as well as magnesium and thiamine.  Research studies have indicated that selenium may lower the risk of breast and prostate cancers.