An Off-Season Ode to the Sweet Pleasure of Maple Syrup 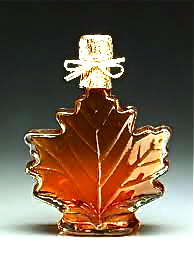 Even in the heat of summer, I’m passionate about maple!” And  perhaps you are too?

Imagine how it must have been for the indigenous Americans and early settlers who  survived
winter on rations of dried meat, fish and roots, when the sweet, syrup was tapped and boiled then poured on the snow.

Knowing how the sweetness promised the change of seasons and broke the monotony of  simple, bland foods, I thought of the traditional pygmy peoples of Africa whose third most common cause of death was falling from trees while gathering honey. (The first  was being trampled by large animals; the second was falling into the fire at night after smoking powerful tobacco.) What a joy for those waiting on the ground for a mouthful of thick, sticky pleasure in a life of game, grubs and roots and shoots. (And a greater joy if the gatherer survived the climb!)

Written by Patricia Rain on June 1, 2012. Posted in Candies and Confections, Culinary, Recipes 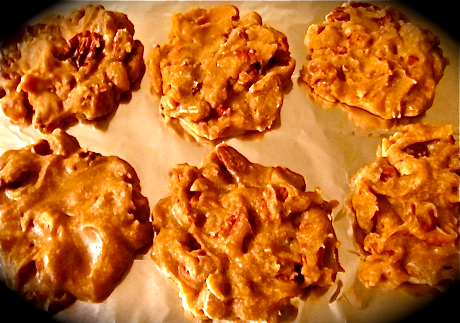 There are times when you need to stick to the tradition and there are times you can mess with it. This riff on a New Orleans-style praline recipe produces sweet, slightly crumbly candies loaded with toasted pecans and a subtle maple flavor.